With Russia’s hand heavy on American politics, should young Canadians be concerned about where their vote is going in Canada’s future elections?

In a little over two years Canada will be having another federal election: Oct. 21, 2019. Just last year hackers, allegedly Russian, interfered in the most recent U.S. election by releasing information from the DNC’s private email server. Canadian Security Intelligence Services (CSIS) released a statement to VICE News last week saying they cannot confirm or deny any Russian involvement in Canadian politics.

For millennials just coming of age to vote in the future election and the following generation, this answer comes with the uncertainty of whether or not their vote will really matter and whether or not they’ll know if it does.

Initially it began with Russia specifically taking an interest in Canada’s Foreign Affairs Minister, Chrystia Freeland. Reports from pro-Putin publications came out in early March giving details on Freeland’s grandfather being the chief editor of a Nazi newspaper vilifying Jewish people in occupied Poland during World War II. Freeland’s uncle and professor emeritus at University of Alberta, Jean-Paul Himka, has acknowledged his family member’s involvement in spreading Nazi propaganda in a paper he wrote on Ukrainian and Jewish relations in WWII. However, Freeland herself has not acknowledged the connection and suggests it is a Russian disinformation plot even though she helped edit her Uncle’s paper on the subject. 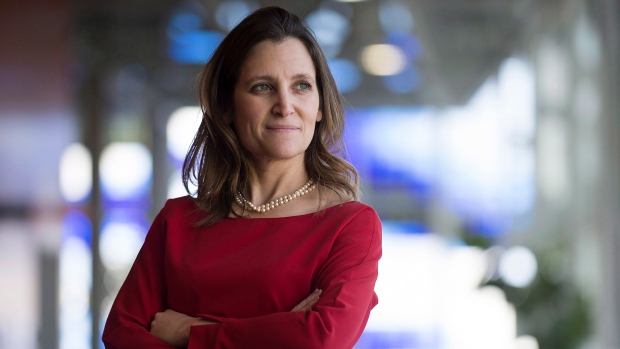 This brings us to the statement VICE News got from CSIS. Freeland has been vocal in recent months about the threat of Russian disinformation campaigns possibly affecting more Western countries beyond the U.S. presidential election. VICE News reached out to CSIS in hopes of getting to the bottom of this.

This is what CSIS says: “We neither confirm nor deny that the records you requested exist. We are, however, advising you … that such records, if they existed, could reasonably be expected to be exempted under or more sections of [the Access to Information Act.]”

This is like a Schrodinger’s Cat answer. “The cat is neither dead nor alive because you can’t look in the box to find out,” or “the documents are there but also not there because you can’t find out through the Access to Information Act.” This is not only a call for more digging into the possibility of Russian interference in Canadian politics but, it also says a lot about transparency from the government and intelligence agencies – something Prime Minister Justin Trudeau was once keen on reforming but, that battle has since been forgotten.

Let’s summarize: Freeland was once a journalist working out of Moscow most recently in 2014, before being banned from travelling to the country, and was a prominent dissident pro-Ukrainian independence voice opposing Russian President Vladimir Putin. So Russia has probable cause to be running disinformation campaigns in Canada to discredit her and the political process. However, this is not technically disinformation because her grandfather’s edits in a Nazi newspaper is confirmed by Freeland’s uncle who wrote extensively on the subject. These allegations prompted VICE News to ask CSIS for more information and CSIS left them with more questions.

With such questions left unanswered, Canadian voters are left wondering if they should be worried about Russian interference in coming elections? What’s more is they may never know to worry if Canada’s government and intelligence agency aren’t being as open as they could be about the subject.