Imagine being disengaged and unsatisfied doing something that consumes over 20 per cent of our waking hours over the course of a lifetime.

That is a reality for 87 per cent of people.

A recent survey of workers in 17 of the world’s most important economies analyzing employee engagement and satisfaction found that only 13 per cent of people are reasonably enthused about their daily grind.

The survey, conducted by Ipsos for furniture and workspace systems company Steelcase Inc., explored factors that influence one’s stimulation as a prisoner of the ol’ 9-5 (or 6-10 as it may now be).

And no, performance-enhancing shelf lights aren’t going to rescue the more than one-third of workers worldwide toiling away in disengagement.

That last metric is especially important, and says a lot about the country that reported he highest level of engagement and satisfaction: India.

Twenty-eight per cent of Indians say they are highly engaged and satisfied at the workplace, which can be largely attributed to the fact that work can often feel like a haven from the congestion of everyday life.

“Culturally, having a workspace of one’s own, even if it is compact and modest, is a signal of belonging and importance, which may explain the overall high degree of workplace satisfaction,” the report said.

It’s no surprise, then, that the most highly engaged employees tend to hail from emerging economies and the least engaged often come from countries in well-established markets.

France, for example, is home to just five per cent of workers who feel highly engaged and satisfied, while 18 per cent report they are highly disengaged and unsatisfied. The rest either fall somewhere in the middle or are on strike.

Which brings us to Canada, which hovers around the global average of engagement and satisfaction. Eleven per cent of Canadians derive a degree of pleasure from their employment, while 10 per cent are not engaged or satisfied.

The full ranking, courtesy of Quartz, below: 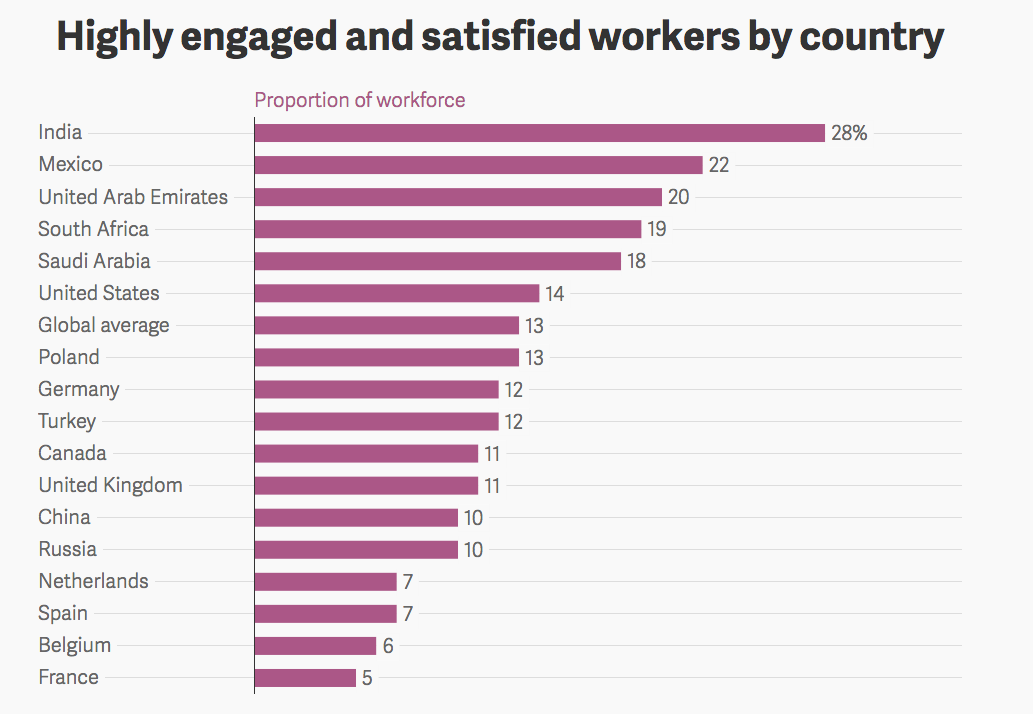