Despite mountains of stats and analysis to paint an accurate picture of the “typicale” Canadian family, our government has managed to completely misrepresent reality.

And yes, the reason is very political.

Meet Henry and Cathy, both working with two kids, who have a combined income of $120,000. They’re this year’s poster family used in messaging around federal budget time, their reality heavily skewed to fit the mould of a household that would benefit from Prime Minister Stephen Harper’s Economic Action Plan.

First thing’s first: Henry and Cathy are nowhere near the median income for Canadian families – $120k puts them in the top 15 per cent, almost double what the typical Canadian family earns.

More suspect, though, is the disparity in who’s raking in the cash – $84,000 for him, $36,000 for her. This is significantly different than the income split of past years; poster families of the previous three years saw a difference income between $14,000 and $20,000, relatively equal compared to Henry and Cathy’s $48,000 divergence. 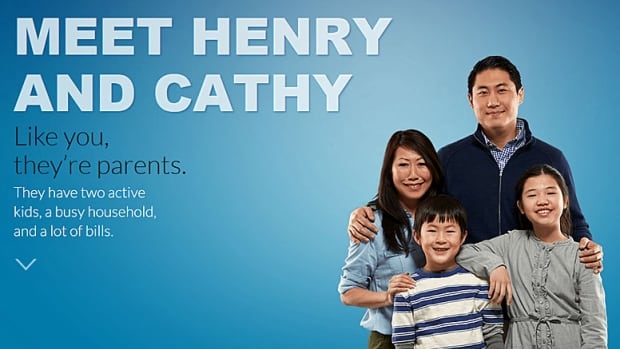 The reason for constructing the family this way is to justify in our government’s income-splitting tax plan, which essentially benefits only the upper tier of Canadians.

“[The Conservatives’ imaginary ‘typical family’] benefits from boutique tax credits that most real families don’t make enough to qualify for, and the Conservatives have changed their sample incomes to suit their political purposes, despite the fact that 85 per cent of Canadians will get no benefit at all from their income-splitting scheme,” said NDP finance critic Nate Cullen.

Finance Department David Barnabe pointed out that the tax savings example in this year’s budget is merely illustrative, rather than average… which would be fine if Henry and Cathy weren’t advertised as “like you” in the government’s messaging.

We’re sure a lot of typical Canadian families would like to have a word.