Happy Monday Vancouver Notables. To kick off the week on the right foot, we’ve got a stellar contest for you. Notable would like to send you and a friend the special sneak peek of Horrible Bosses, in theatres July 8th, at the Cineplex International Village Cinemas on June 29th! Horrible Bosses is an upcoming comedy with an all-star cast (Jason Bateman, Jennifer Aniston, Colin Farrell, Kevin Spacey, Jamie Foxx, Jason Sudeikis, and Charlie Day) and is definitely a flick a lot of young professionals can relate to.

Management candidate Nick Hendricks (Bateman) has been logging 12-hour days and eating everything his twisted supervisor Dave Harken (Spacey) dishes out, toward the promise of a well-earned promotion. But now he knows that’s never going to happen. Meanwhile, dental assistant Dale Arbus (Day) has been struggling to maintain his self-respect against the relentless X-rated advances of Dr. Julia Harris, D.D.S. (Aniston), when she suddenly turns up the heat. And accountant Kurt Buckman (Sudeikis) has just learned that his company’s corrupt new owner, Bobby Pellit (Farrell), is not only bent on ruining his career but plans to funnel toxic waste into an unsuspecting population. 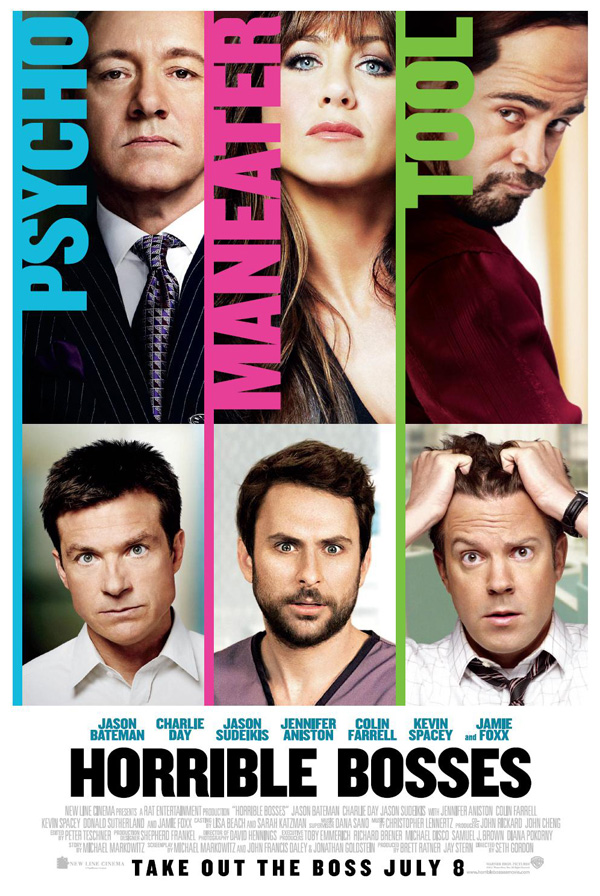 What can you do when your boss is a psycho, a man-eater or a total tool?

Quitting is not an option. These monsters must be stopped. So, on the strength of a few-too-many drinks and some dubious advice from a hustling ex-con whose street cred is priced on a sliding scale (Foxx), the guys devise a convoluted but foolproof plan to rid the world of their respective employers… permanently. To learn more about Horrible Bosses, in theatres July 8th, head over to horriblebossesmovie.com for information, trailers, and more.

Want to win a pair of passes to the Vancouver word-of-mouth sneak peek for Horrible Bosses? It’s easy: All you have to do is reply to the thread on our Facebook wall with “So happy I don’t have Horrible Bosses!” and you’ll be entered to win.