A Toronto woman is proudly vandalizing the Toronto subway system and leaving her mark with her signature hashtag: #youdontneedthis.

No, she isn’t referring to the often-infuriating service of the TTC.

Jennifer Dawson, a digital marketing professor at Seneca College, is “taking a stand for self-worth” by writing “you don’t need this” over cosmetic surgery ads on the TTC. After growing increasingly agitated on her daily commute by ads for the Toronto Cosmetic Clinic, Dawson was thrilled so see the words “you don’t need this” and – armed with a dry-erase marker – decided to join the movement.

Naturally, she shared it all on social media, posting them on her Twitter and Instagram accounts, complete with the #youdontneedthis hashtag. The hashtag is beginning to trend as similar ads are being defaced in cities like New York.

The issue people like Dawson have with such ads is that they inspire women to question their physical appearance and beauty as they inevitably compare themselves to the women in the ads, and think will I look that good after cosmetic surgery? Maybe that’s all I need….

After all, we’re already bombarded with airbrushed illusions of “perfection” in magazines; we don’t necessarily need to be involuntarily exposed to them on the way to and from work. So, with that said, I get where Dawson is coming from, although I’m not sure that vandalism is the solution. It’s easy to see the ads and feel “less than” – I’ve been there.

And yes, things like ads for a cosmetic surgery company definitely promote idealized visions of what’s attractive, what we should strive for, and what we could obtain for ourselves, given our wallets are thick enough.

But, the thing is, we live in an era of illusion where we can essentially construct how we would like to look – in everything from buying hair, breasts, and coloured contacts, to editing a photo and choosing that perfect filter to hide our (perceived) flaws. You may not agree with it, but it’s the reality. 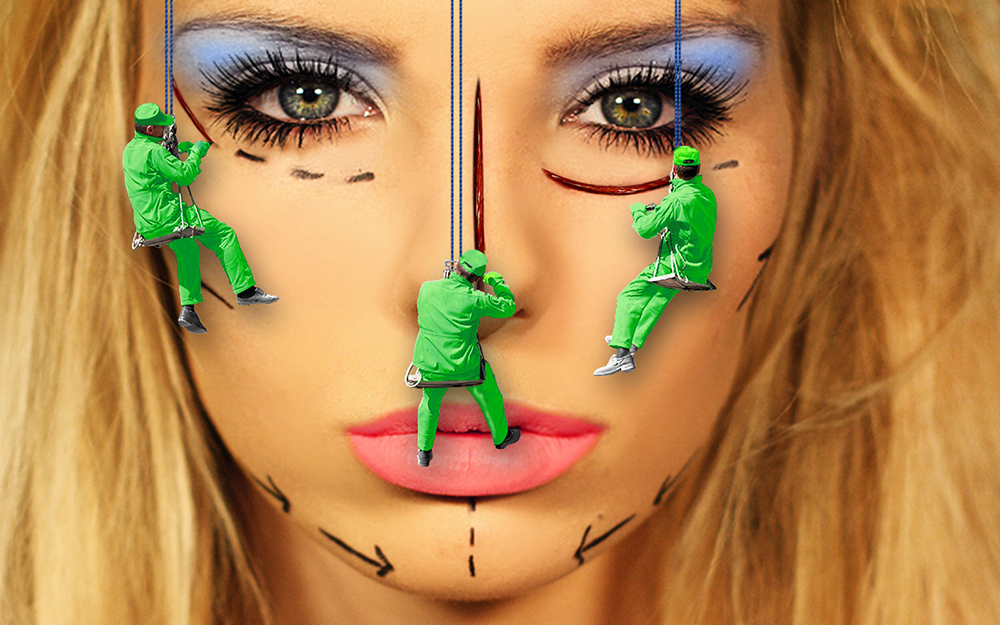 When it comes to cosmetic surgery, while I agree with Dawson’s claim that women don’t need it, I think it’s perfectly fine to want it. That is, if you want it for the right reasons. Understanding that altering one’s appearance cosmetically won’t solve all of their problems, opting to do so can definitely boost a female’s confidence, self-esteem, and the way she views her appearance. In fact, opting for “a little work” can be an empowering decision and experience for a woman.

I’ve seen it happen in a growing number of female friends who have slowly hopped on the Botox train, for instance.

If a female wants to bring back some life to her breasts after nursing three kids, a touch of Botox so she doesn’t look so angry all the time, or a lift to brighten her eyes again, who are we to judge her? With that said, I have yet to try Botox – but you can bet that I will. I’d probably consider uplift post-kids too. And no, I’m not ashamed to admit that.

When it comes down to it, it’s all about moderation and being smart about it. Teenagers getting fillers and lip injections just doesn’t seem right to me. Nor does opting for multiple surgeries only to emerge looking like a totally different person. And hopefully we’re all smart enough to know that the model in the magazine looks very different in real-life.

As for the TTC ads, the ones defaced by Dawson are from the Toronto Cosmetic Clinic. As you may recall, in 2007, popular Toronto real estate agent Krista Stryland died at this clinic after receiving liposuction by an unqualified doctor. The tragic situation served as a reminder to do thorough research before opting for cosmetic surgery. It’s surgery, after all – and you only have one body.

The decision to opt for cosmetic surgery should be the result of careful self-reflection and evaluation (know why you want it), research (be smart about it), and a desire to enhance what you have – not totally transform yourself. Moderation is key, and less is almost always more.

But there’s nothing wrong with it.

If you disagree with me completely and see a fresh, unmarked poster on the subway, you still may want to think twice before you reach for your marker – a TTC spokesperson warns that writing on a subway ad can be punishable with a fine.