Fourteen years after the landmark A&M Records, Inc. v. Napster, Inc. intellectual property case and the internet content crisis is just as intense as ever. At least now it’s a little bit funnier because as of this week, all eyes are on comedy.

In particular, one heavy-set Hebrew with a deliberately incongruous fashion-sense that may now be the funniest thing he’s ever created: Josh Ostrovsky, AKA The Fat Jewish.

You’ve probably heard of him. He has 5.7 million Instagram followers because every day, he posts funny stuff on his account. People love funny stuff. In fact, it’s so funny and so many people like it that the eyeball-hungry, talent-indifferent media machine has forged him quite the little career.

Ostrovsky’s numerically convincing status as an “influencer” has earned him a book deal with a major publisher, a radio show on Apple’s Beats 1 network, a modeling contract with One Management Agency, brand sponsorship contracts with the likes of Burger King, Virgin Mobile, and Stella Artois (who flew him to the Cannes Film Festival last year), an exclusive contract for representation with Creative Artists Agency (who also represent entertainers like Tom Cruise, Robert De Niro, Robert Downey Jr., and Will Smith) and a script development deal with Comedy Central.

He also commands upwards of $2,500 for product placements in his Instagram posts and physically irreverent appearances at brand-sponsored events.

So what’s the issue, you ask? Why controversy over this particular social media sensation and not the hundreds of other minute-long, meme-made millionaries?

Because this one, The Fat Jewish, is being outed as a big fat copycat; just about all of his Instagram posts are edited reposts of other people’s material, chock-full of all their content and totally void of any credit.

And he’s being outed hard; The Daily Beast, Salon, Splitsider and a number of other publications are giving painfully honest accounts of his unapologetic trail of plagiarism (throw us on the list too, admittedly pulling a 180 since recommending his feed a month ago). More importantly, they’re finally circling back to the concept of “credit” by reminding everyone that the creators are being dusted while the curator is getting varnished.

One post on Storify cuts right to the chase by listing just the top fifty jokes poached by The Fat Jewish that not only lacked proper source credit but were deliberately edited to suppress the source and camouflage Ostrovsky as the creator.

Here are some examples:

And it all seemed to start with Maura Quint, a writer for Someecards, publicly posting the following plea / nuclear attack after news broke that Ostrovsky had been signed to CAA… 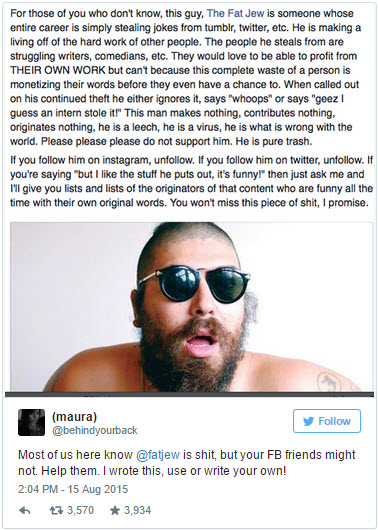 A post that inspired a flurry of angry, supportive Tweets from affected, disgruntled writers and comedians, including some pretty big names in the biz… 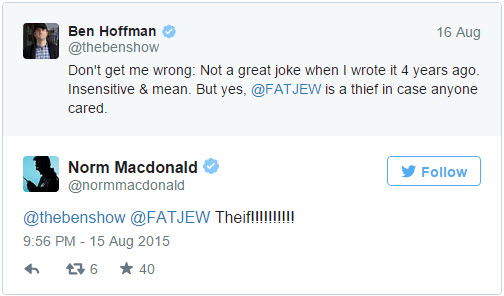 So will it make a difference?

According to Tech Insider, Comedy Central has confirmed that they “…had a script deal that didn’t proceed to pilot,” and that the network has “…nothing in development with Josh Ostrovsky.”

But neither expiry is being attributed to the current stink.

The real question is will it make a difference to the industry and to people like you? Ultimately, those are the two groups driving his success, both from their own unique positions of apathy and entitlement.

One of the more astute tweets came from a comedian named Mike Lawrence:

And it is a profound point; the media industry, with its Klout Score anxiety and an overwhelming strategy to now double-down on performance rather than develop on promise, is designing a content cradle in which the savviest social marketer has at least two legs up on the most talented artists.

But “the industry” isn’t some autonomous ogre wandering the streets of commerce just bashing the little guy because they’re grumpy. They’re a responsive business model that caters to the demands of the masses while avoiding the risks those very masses impose upon the system with their adamant entitlement to great content that’s easy to find and even easier to afford – in other words, “free”.

Much of this is up to us.

Our aggressive sense of entitlement, our ever-evaporating attention spans, and our biased indifference towards the “starving” mark of the literary artist are the driving forces behind a model that rewards the people who make the piles instead of the contributors who are all but anonymously layered inside them.

Having read this article, will you actually stop following The Fat Jew on Instagram in lieu of the talented, grinding artists out there who truly represent the diverse community of entertainment and creativity?

Maybe you will, maybe you won’t. At the end of the day, Ice-T made a compelling argument when he told us all not to hate the player, but to instead hate the game.

However, when it comes to showing appreciation, giving credit, and deciding to whom and what we allocate our cash-liquid attention, let’s not forget who makes the rules.