Toronto four piece Pkew Pkew Pkew play riff heavy, guitar driven, pop punk. There is an emphasis on gang vocals and thematically their music focuses on drinking, pizza, and skateboards. The band’s music is incredibly fun but not typically the style you’d associate with four dudes in their late twenties. Over bottomless Dr. Pepper and unlimited slices we grilled Pkew Pkew Pkew about why they’ve committed to a genre most people grow out of. 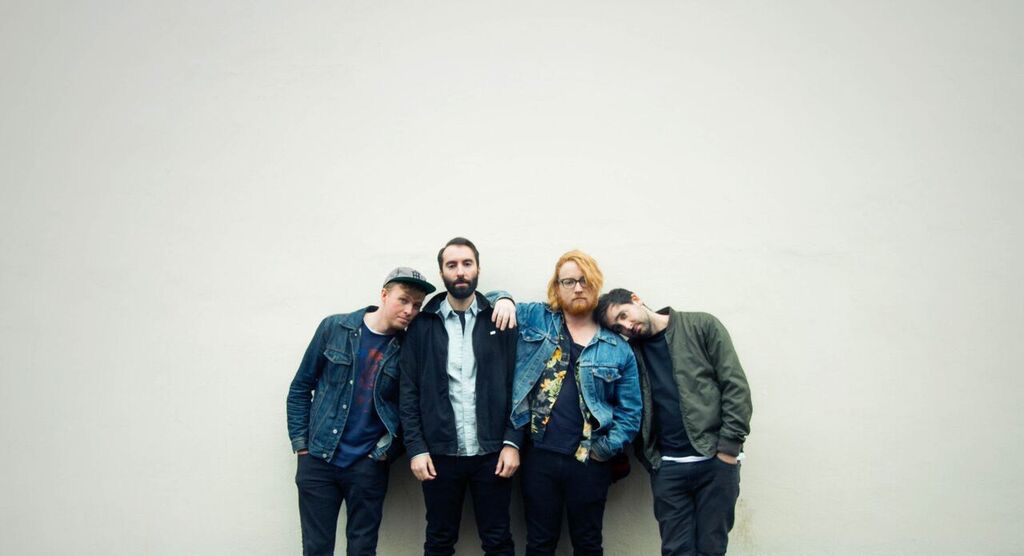 I’m sitting at a Pizza Hut Buffet located outside a sprawling shopping mall in Toronto’s west end. Across the table are Mike Warne and Emmet O’Reilly of the band Pkew Pkew Pkew. We’ve each filled up plates – our third – with slices, pasta, and bread sticks. No one is showing any sign of stopping.

For the past few years I’ve been watching Pkew Pkew Pkew as they’ve grown from barely their crowds in dingy bar basements, to opening for larger acts like PUP and The Hold Steady, to packed out headlining performances across Toronto. That first gig I attended felt like a party montage in an early aughts high school comedy. As Pkew Pkew Pkew started up there was dancing, stage dives, and kids making out. By the third track from the four-piece I was able to join in with the sing-a-long choruses and over the top lyrics. The gig was fun. And if there is anything a good concert should be it’s fun.

I can’t remember when I got to know Pkew Pkew Pkew personally, but at some point I drunkenly promised the band if they ever signed to an American label I’d buy the boys buffet. To be honest the buffet promise wasn’t something I ever thought I’d have to follow through on. The band – like myself – are all in their late twenties and while they can certainly rile up a crowd the type of music they play is hardly at the forefront of pop culture. Guitar songs about drinking and skateboards aren’t exactly popular with the kids. The songs seemed like a throwback to a barely remembered adolescence and I doubted they had much appeal outside of our little niche. Earlier this summer I was proven wrong when Pkew Pkew Pkew signed to iconic punk label Side One Dummy, who just re-released the group’s self titled debut. As I finished up my eighth slice I asked Mike and Emmett whether signing to the label made playing in a pop punk band seem like an actual, adult, career choice.

“I mean, not really,” said Warren while finishing off some nachos. “But there aren’t a lot of adult career choices you can make right now, regardless of what you go into. I figured we might as well make a bunch of songs we like and have fun with our friends.”

“What else is there to do?” added Emmet

I could see their point. For the next forty-five minutes I asked the boys a series of questions about the band and their goals. While I kept attempting to philosophize about the larger societal impact of playing two-minute tracks about booze and skateboards in a time where it seems like twenty-somethings will be in debt forever, Pkew Pkew Pkew seemed to care more about the pizza than my pseudointellectual rambling. The closest the band got to my projection of off-kilter grandeur was the fact that Mike and Emmet think what they do is funny without it ever seeming like a joke.

“My life is pretty funny to me because I do stupid things all the time,” said Mike.”The night before Side One Dummy announced the album the label asked to shoot some promo videos. We all slammed a bunch of tall boys and went out. We’re shooting stuff and playing basketball in the rain. We’re not making any shots because we’re drunk and it’s like 12:30 at night. Then out of nowhere some kid comes up and says: hey aren’t you guys in Pkew Pkew Pkew? We chatted for a while and I thought that of course this is when someone recognizes us. We’re adults who are drunk off our asses playing basketball in the rain at 12:30 on a Tuesday night. Want to make that into a metaphor?”

“It’s a funny lifestyle,” says Emmett. “It affords a lot of freedom and it’s very fun. And I guess there is the expectation to give that up at some point but for now it’s not so bad….”

Emmett seemed like he was about to make some kind of bigger point when our waitress came by and asked if we needed refills. We all decided it was time to hit the buffet again. If there was a bigger point to be made than we could figure it out later.

Pkew Pkew Pkew are currently on tour with Canadian punk rock veterans The Flatliners and have plans for more North-American touring later this year. Follow Pkew Pkew Pkew on twitter.

This interview has been edited for clarity. Cover photo credit: Graham Isador