In the dark depths of January, one particular day has offered hope and comfort in recent years.

If you’ve scrolled through social media today, then you likely know that today is Bell Let’s Talk Day.

The growing and powerful movement – both online and off – has contributed enormously to both the erosion of the long-held mental health stigma and to the generation of ever-important dollars to the cause.

If you’ve somehow missed the commercials, billboards or social media activity, here’s the deal: Today, Bell Canada will donate 5 cents to support mental health initiatives for every long-distance call or text sent on the Bell network, and for every tweet, Instagram post, Facebook video view and use of the Snapchat geofilter.

Since its inception in 2010, the day has inspired a powerful and impossible-to-ignore conversation about Canada’s mental health that has gone on to play a crucial role in the erosion of the stigma, and to generate millions of dollars for the cause. This funding is making a major impact in mental health-related organizations across the country, most of which need all the support they can get.

To date, the initiative has raised over $6 million in community fund grants.

Front and centre of the campaign are familiar Canadian faces like Olympian Clara Hughes, Howie Mandel and Michael Landsberg – all of whom have struggled with mental illness.

The thing is, there are a growing number of familiar faces to all of us when it comes to this issue. That’s because the wearing-away of the stigma, and campaigns like this one have inspired Canadians nationwide to take to social media to reveal their own struggles with things like anxiety, depression, addictions and eating disorders.

It’s happening as we speak.

It’s really quite phenomenal to witness, this widespread “coming out” of people in their bold and brave reveal of their struggles. Today already, I have read posts by those from who you’d least suspect, acknowledging battles past and present with everything from postpartum depression to anorexia and anxiety.

But it shouldn’t be surprising.

When mental illness will affect one in five Canadians over their lifetime, we all know too well that it doesn’t discriminate. In fact, if you don’t know someone who has been affected by it, consider yourself a rarity. 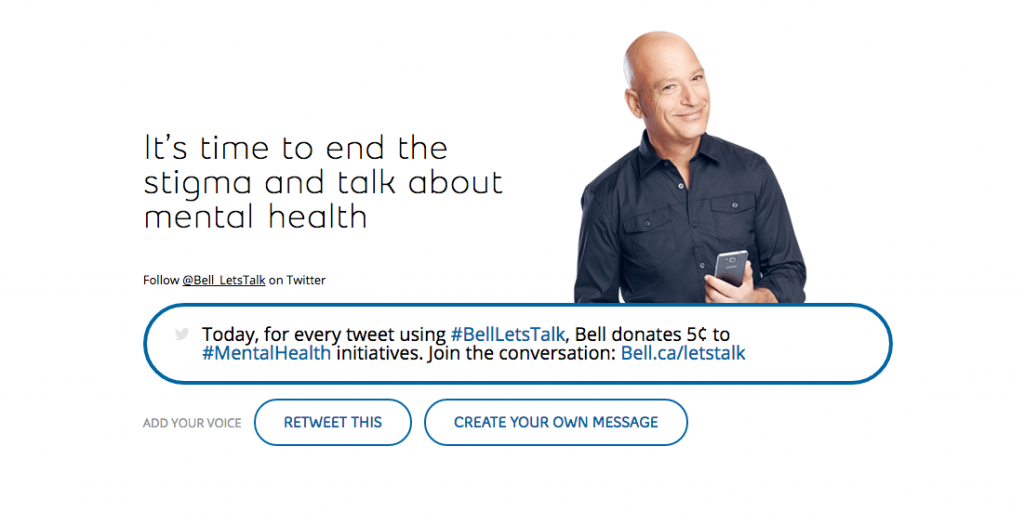 After losing a friend to suicide who appeared to have it all from the outside, and both spending time with and interviewing survivors of suicide attempts and depression, I can tell you that – right at this moment – somebody you’ve come in contact with in the past week is struggling, if it’s glaringly obvious or not.

Whether it’s a friend, family member, coworker, client or local barista, someone you know is likely suffering at this very moment. Maybe you are yourself.

The good news is that campaigns like Bell Let’s Talk have armed countless people who previously struggled in silence with the bravery to “come out” and to seek help.

I can’t help but wonder if such an initiative and the accompanying erosion of the mental health stigma, that things may have taken a different direction for my friend, who ended her life three months before the campaign was born.

While the progress since her death has been incredible, we still have a long, long way to go. We need to focus on mental health in everything from the elementary schools (like one Baltimore school that replaced detention with meditation) to the workforce (more companies should follow the lead of Manulife, which recently increased its mental health benefits by a tenfold).

And don’t even get me started on affordable access to treatment (therapy tabs can set you back close to $200 a visit). Proactive initiatives like those of Toronto-based startup, TranQool, which connects patients with licensed therapists through online video chats (therefore cutting the cost) are helping. The reality is, when more people address their issues, more people are going to need care.

But, back to the positive. Moving forward, I know that this long overdue dialogue can’t be silenced the way that the pain of so many has been for years. And that’s what makes Bell Let’s Talk Day so important.