Have you ever meet someone and thought, “k, you’re #goals!” *heart eyes emoji* *praise hands emoji*?

That’s what it was like meeting Suzanne Barr for the first time, an opportunity I had – albeit only briefly – at an industry night back in February. As chance would have it, our paths crossed again when I sit down to interview her, at an event hosted by AIR MILES and LCBO. This event entailed a one-night-only dining experience for 30 lucky contest winners and their guests curated by Barr, and musical accompaniment by the rock band Arkells.

While Suzanne’s current notoriety as a renowned Toronto chef and restaurateur is what brought Suzanne to be involved in this event, her journey towards this is nothing short of spectacular. She had a past life as a producer for MTV, has spoken all over the world, been featured as a guest columnist for many renowned publications, has a passion for the local community, food security and is a fierce advocate for women, people of colour and the LGBTQ community. She has owned restaurants and has been the chef-in-residence for several establishments in the city of Toronto, and is co-owner of one of the East-end’s newest establishments, True True Diner. She has accomplished so much, and there seems to be nothing stopping her from doing more. 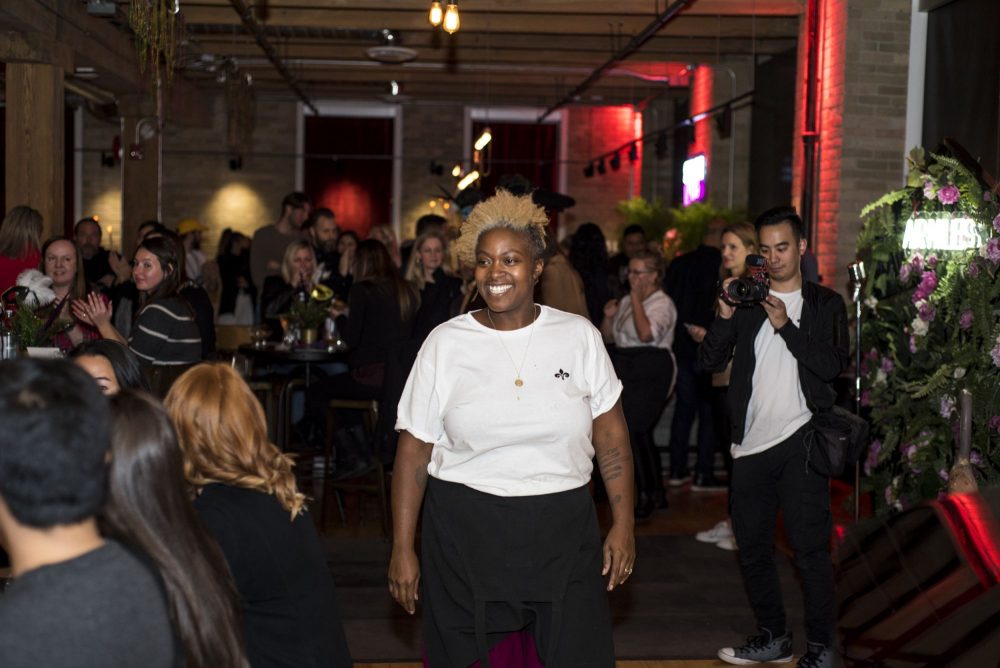 You’re a chef, an author, a producer, a mother, a wife, and you’re a massive advocate for the community. How do you balance everything?

It’s funny you ask, I was just speaking to a master’s degree program at George Brown yesterday about it and one of the chef instructors asked me, how do you keep the balance? And honestly it’s about having a really strong solid team behind me, and that takes a while and requires a lot of effort to nurture, in order to create the space for people to want to come in and feel like they’re a part of what I’m trying to do.

The message I share with them then becomes relatable and they feel like they have a connection. I have to be very vocal about what I have time for. I can’t just isolate myself, but I love doing many things and I feel like it’s important.

You don’t have the balance, but you have the support. Which dare I say is better, and totally works.

Yeah. You know, it’s like work-life balance. I use my mantra. That is what I say. I really make a strong effort, especially with this new project right now that I’m doing to try to keep that, you know? To be committed. Whether it’s like, oops, I forgot to do that, but you know what, tomorrow I’m going to do better for myself. And like, just making myself accountable, you know? It’s important to always check-in; check-in with who’s around me, how I am doing and where I’m at and make sure we’re all on the same page and everything is getting completed.

That’s great. How is that going, your latest project – True True Diner – and the development of your brand?

We opened maybe two months ago now. It’s going really awesome. It’s a very new part of town for me in Toronto. I’m an East-end girl. We’re on the cusp of the end, but I’m kinda nestled in that downtown, “business business” district. So it’s quite interesting to have a new client base. But the clients, I do remember from Saturday Dinette are still coming through our doors. I think that we really brought a true homage to what the dinette was with the photography on the wall with the music, with the brunches, with the dinners and the late nights and all the things that are important to us. We’ve got two nights a week that we’re really trying to focus on community efforts. So that just keeps it going.

Yeah, that’s great. But at one point, you were head chef at the Gladstone Hotel, right?

I was at the Gladstone, I loved my time there. That opportunity was life-changing. That absolutely changed my life as a chef, as a Jamaican-born first-generation Canadian-born woman. And it really got me back connected into what was important to me and that was making food that was tangibly connected to me and the conversation that I’m talking about.

That’s culture, that’s race, that’s all the things that are exciting about why we eat this food and why we need to talk and not be shy to talk about it. Just so everyone else can understand. It’s like, no, I’m going to actually educate you. Are you ready? Are you listening? Yeah.

Actually that’s a great point. You build an experience, your ethos is not just about the food, it’s about the way you make people feel which kind of is a good segue about this event. Have you been to New Orleans?

I have been like three times. I think living in the South – I am American and Canadian – and growing up in Fort Lauderdale as well as spending many years and Atlanta, Georgia, that Southern roots are real for me. And when this opportunity came, I was like Southern food! I’d go to bed, you know, just, thinking about it.

The first time that I went there and smelled the smells, felt the vibe, you know, talked to the people and heard the music like it is. It’s not just like this during Mardi Gras when it’s just like an overload of lights and an over-saturation of so much. We just chose to go because I had the most magical time, and we’d stumbled on streets that we we didn’t even know, and someone would be like, “come on in, we’re making shrimp po boys!” and then someone else would be playing like a horn and we were like, oh man! So those memories, those travel stories, those parts of me and just loving food and loving cities is why I really, really felt so connected to this opportunity. 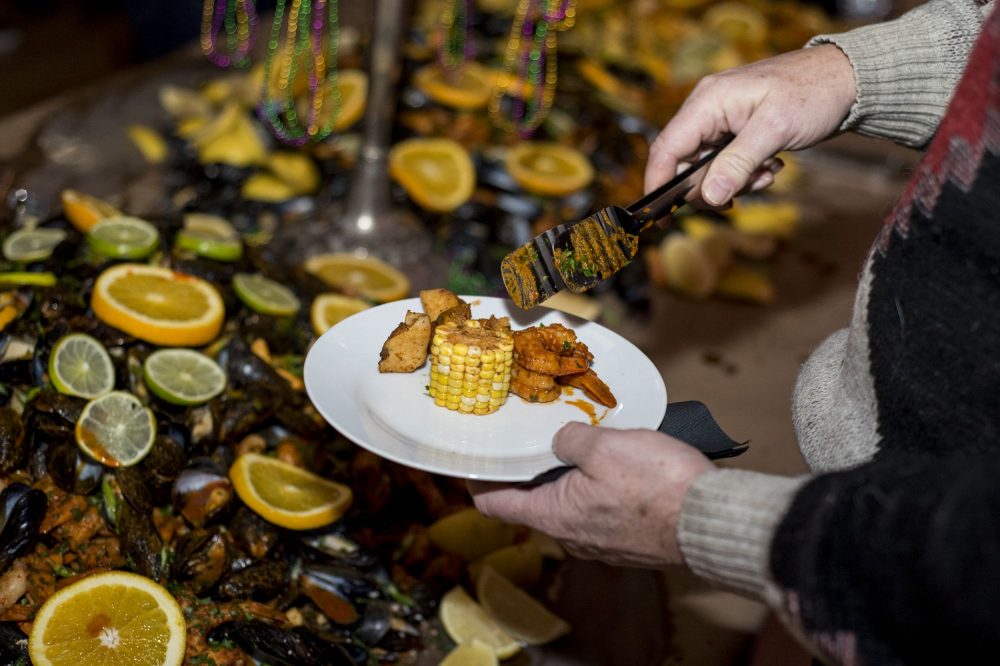 That’s amazing. What is the relationship you feel between music and food or using music as a part of the culinary experience?

Yeah. You know, we started hip hop Sunday brunch at the Dinette four years ago. And it is something that we still keep on going and we brought it to True True Diner. Music is what fuels me. Music is what keeps me going. Music is like the connecting dots of when I get an inspiration and when I think about something or I think about a dish, I think about a song and I think about where I’m at and how that might motivate me. I was a dancer first, you know, I started out in Florida as little b-girl wanting to do this, that and the third. So dancing and music is a part of me.

And then food became another extension of me because food is always, always been around in my family. Yeah. And it’s like music and family. So that is a big part of like why I love what I do so much. Yeah.

It’s such an integral part of the dining experience. Candles or you know, like drink-pairing. As you continue to build out your brand and you are such an experiential person, where do you see, how do you see yourself evolving?

I think my evolution is, is really connecting with my son a lot more. He’s four now and understanding that raising a young black boy is important to have someone that’s present in his life, in his mom. And I want to be there as much as I can, but I also want to show him what I have done and what I’ve created. I want to expose him to things like travel by food, by being in our restaurant. To see his Mom running the kitchen but also running with an amazing team of talented young cooks and front of house staff. And to train him to understand what that looks like for the next generation of young chefs and folks writing a cookbook, or working on a couple of TV shows. So just keep him busy.

But I think the most important thing is like making sure I’m staying grounded. Making sure I’m staying connected with my friends and my family and listening to their thoughts for me and to sustain this cause it goes quick and you know, it goes fast if you’re not really looking out and you’re not really watching, you can miss some magical, magical things.

Even though it does feel like you have such a huge responsibility, it seems to come so naturally to you. You’re just a natural advocate. While you’re a chef and author, an advocate for LGBTQ community, for black women, for Jamaican community, what’s your biggest purpose?

When I think about what I’ve done in the last month to, you know, being, being an MC for this, or leading a new chair for that – for example, we had our first Black share seminar and symposium and I was the MC for the day and I was able to stand on the stage with some of the most incredible black indigenous people of colour. That is at the top of my conversation: recognizing that we are here, we’re not asking to be in the kitchen. We’ve been in the kitchen. We’re commanding you to listen to us, commanding you to hear our voices, to hear our stories, eat our food; we’re trying to bring to the forefront of the conversation. Not being afraid to back down from anyone.

Challenging something that I’ve done, but always being able to keep myself aligned with the most incredible, humbled organizations and influencers. And when I say influencers, I mean those people that are out there on the day-to-day grind like me doing it. The chefs. Those are the inspirational speakers. So really making sure that the conversation of who I’ve aligned myself with and that when we’re talking about black, indigenous people of colour, that is it.

Awesome. And it’s important, I guess, in that way for you to be here on a night like tonight.