She makes frequent appearances on lifestyle television across Canada: recommending restaurants, discussing food trends and giving her tips on how to do foodie travel right.

In 2019 she partnered with Travelzoo, a leading publisher of member-exclusive travel deals and local experience offers, as their Global Food Correspondent. Their experts have been sending her to explore unexpected eats in culinary destinations around the world, and we sat down with her to discuss her most recent trip: San Francisco.

San Francisco is known for its diverse ethnic enclaves, and food is often a factor in what makes these enclaves unique and special. What is the most noticeable difference between what you saw in San Francisco and other major cities?

This foodie trip was different – Travelzoo’s team of deal experts did months of research to surprise me with an unexpected breakfast, lunch, and dinner over 24 hours… I really had no clue where I was headed for each menu until minutes beforehand! Thinking back, I would say that the vibe in Chinatown was very different. Coming from Vancouver, I have a bias – we have such a strong Asian food scene, so I rarely suss out Chinese food when I’m travelling. But when I found out Travelzoo was bringing me to Chinatown, I ended up being so glad it was on the itinerary because I may have skipped it if I planned the trip myself, which would have been such a miss – there’s so much history that makes it part of the cultural fabric of the city. 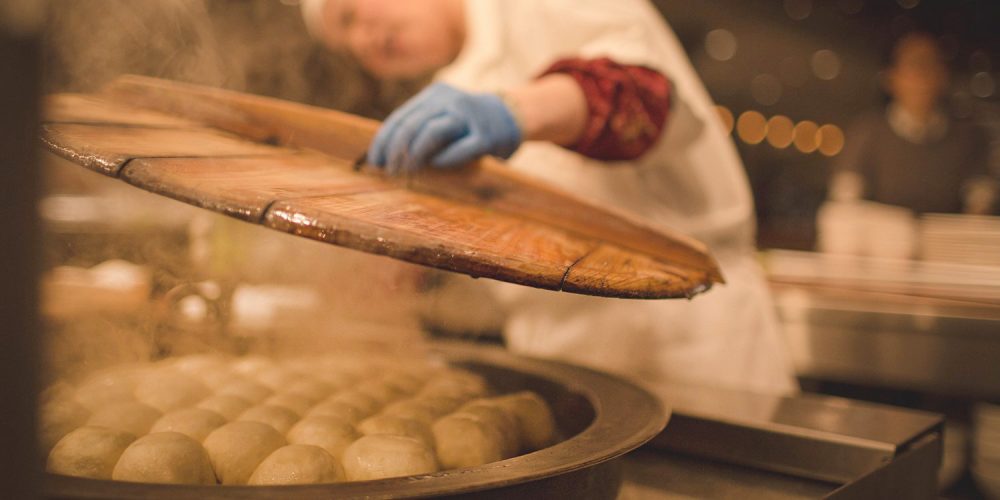 What really impressed me there was the very modern China Live, an impressive multi-floor food emporium that opened not too long ago. I didn’t realize there were so many aspects to that concept. It’s not just a dim sum restaurant, café, high-end speakeasy bar, exclusive fine-dining restaurant, or dessert place. It’s all those things combined – there’s even a gift shop. There’s so much going on, and the space is big enough to execute all those elements well.

After the shoot, I found the entrance via a “secret” street alleyway to Eight Tables by George Chen, which is China Live’s speakeasy-style fine dining restaurant. The décor is very elaborate – it resembles the type of historic, wealthy home that you might have found in old Shanghai. But the food is very modern Chinese, which is great because that style of cuisine hasn’t yet reached the masses the way French, Italian or Spanish food has. I don’t think it gets enough credit or respect because there’s a lack of education about the cooking techniques, the flavour profiles and the history behind it. I really liked that the place is breaking down stereotypes and showing people what Chinese food can be. Insider tip – dine midweek with a Travelzoo deal to get 30% off… the 10-course omakase is a must-try!

What were you most excited about during your culinary adventure in SF?

That there are great culinary experiences even in unexpected places. For the unexpected dinner, Travelzoo brought me to a district that’s little-known to most tourists at this point, Mission Bay, to visit Spark Social, a food truck park which works with over 150 regular vendors that serve dishes from all over the world. A few years ago, the neighbourhood was a bunch of warehouses and not much else, but now it’s developing, there’s the new stadium for the Golden State Warriors and a lot of construction. I’m really curious to know what that will look like in a couple of years because it’s becoming very artsy and interesting. It’s a local’s best-kept foodie secret (for now!), and definitely worth the 10-minute drive from the city core. 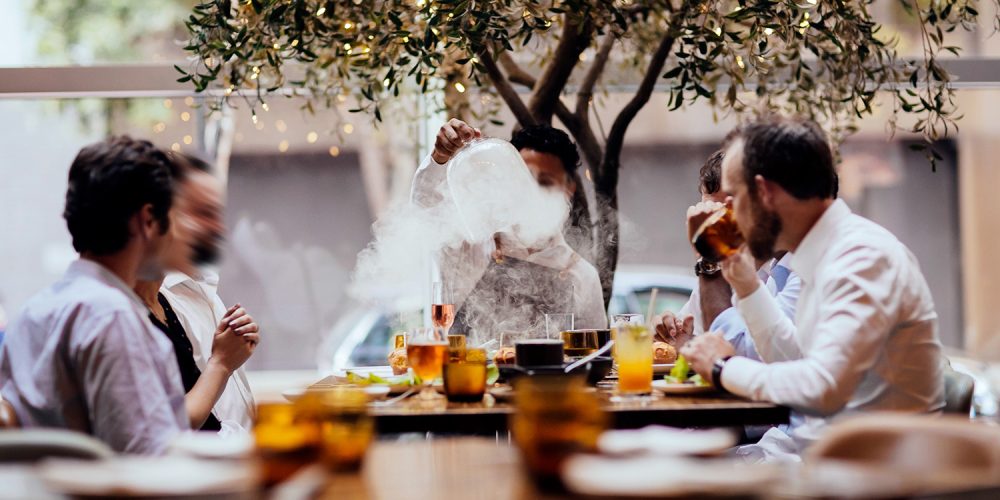 What was the most unexpected dish you ate while visiting San Francisco?

Definitely, the barbecue that Travelzoo sent me to try at International Smoke for the unexpected lunch, which was delicious and totally caught me off guard. Normally you associate barbecue with South Carolina, Texas or the Midwest, places where a lot of cattle and livestock come from. But Chef Michael Mina is a culinary heavyweight and I thought his collaboration with Ayesha Curry, who’s Canadian, was interesting. Travelzoo arranged for a behind-the-scenes kitchen tour where I got to participate in the pre-dinner service tasting by the head chef – there, I could see that they are so committed to the smokehouse atmosphere, even down to the cocktails — I ordered a whiskey-based one that arrived in a smoke-filled chamber. The menu is very global and feels uniquely San Francisco, though it’s become so popular they started opening locations in Houston, San Diego and Florida. During certain times of year, Travelzoo will list deals at this hotspot too, so keep an eye out – that said, make your reservations in advance – they book up fast! When I was there, they were packed by 5:00PM for dinner service!

What important things should people know if they are travelling to San Francisco in the pursuit of good food?

One thing to know is San Francisco is a great destination for farm-to-table cuisine. That’s a term that gets used a lot these days, but the Bay Area really spearheaded the movement. If you look at the terroir where they’re located, there are great ingredients. You have the ocean which has delicious bay shrimp and seafood, a warm climate that’s ideal for farming produce, soil that’s great for vineyards and so on. It’s worth visiting Ferry Plaza Farmers Market, where you can see many examples of what I’m talking about – not to mention a great view of the San Francisco Bay!

But good ingredients can only take you so far, and you need a good chef to show their maximum potential. San Francisco has a lot of diversity so there are culinary leaders in all types of cuisines: French, Mexican, Chinese and so on. And they’re close to Napa, which has some of the best restaurants and wineries in North America. Many people train under a big-name chef in Napa, then move back to the city to open a restaurant at a more affordable level.

Another thing that’s very important is the general lack of pretention. You could think that because there’s ton of money in San Francisco and young people in technology are doing well, it makes everything unaffordable. But you can eat good food at really reasonable prices. 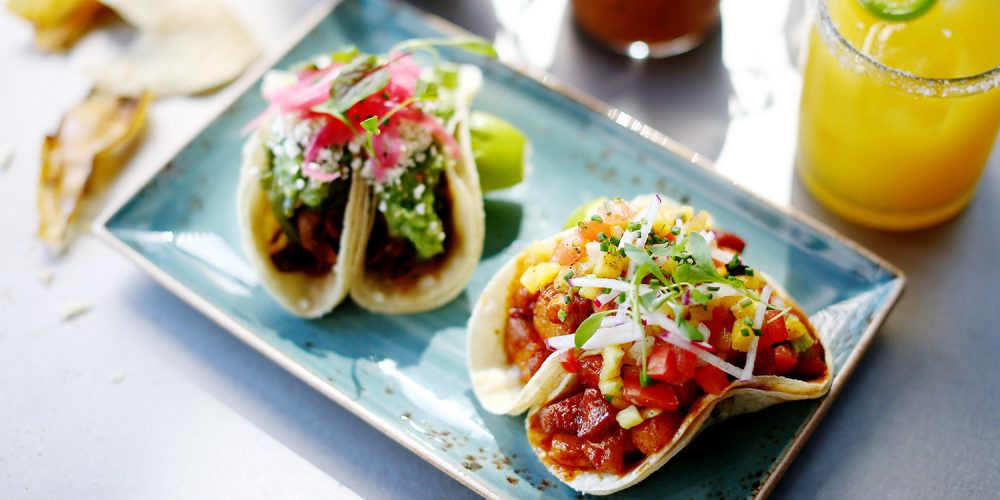 Can you give us some affordable recommendations in San Francisco?

I’d recommend checking out some of the bakeries. Tartine has become iconic with its morning bun, and it’s super-casual. Bread is a big thing in the city – everybody knows the sourdough – and it’s said that the bacteria that’s required to make it tastes better in San Francisco than elsewhere.

You can also just walk down Mission Avenue and find a whole bunch of taco places. My favourite is one that’s simply called La Taqueria – definitely check that out.

After a long day of eating, you’ll want to crash at a hotel — despite being a busy city, San Francisco has affordable ones. Travelzoo often has good deals, and prices tend to drop in fall and winter.

What food would you say best represents San Francisco as a place?

Most people would say the Boudin bread bowl, which is very touristy because it’s historic. But I don’t like it that much. My vote would be for Swan Oyster Depot, which is also iconic – because what you really want to do in San Francisco is get some good seafood.

Tell us your ideal day in San Francisco.

I’d start the day with breakfast at Neighbor Bakehouse, which is in the Dogpatch neighbourhood, then grab a bus or Uber for some shopping in Union Square. It’s right by the second-largest Macy’s store in the United States, which is in a historic building, plus all kinds of luxury boutiques.

Then I’d walk a couple minutes into Chinatown for a tour of the famous Golden Gate Fortune Cookie Factory. Fortune cookies are not actually Chinese – they were invented in San Francisco – so you can get some of the history there. I’d also stop at nearby Golden Gate Bakery if possible. The owners are kind of hipster-y and open the shop whenever they want, but they’re known for great egg tarts.

Then I’d go to Bar Crenn for dinner. Dominique Crenn is one of the most talented culinary leaders in the world, and she’s an artist as much as she is a chef. Her main restaurant Atelier Crenn is just next door, but if you can’t get a reservation or want something more casual, Bar Crenn is the way to go. You have to get the brioche and her bone marrow custard dish.

After dinner, I’d go for a drink at Trick Dog or Tonga Room. Trick Dog has the best cocktails, but Tonga Room has the best décor. Where else can you see a live band playing Top 40 songs on a stage floating on a swimming pool?

Those are some of my favourite places, but the neighbourhoods are all unique in SF, so try to explore as many as you can. There are a lot of hills, so if you plan to walk, wear comfortable shoes (unless you’re me, in which case it’ll be heels!).

At the end of the video you mentioned you wish you had more time in the city. What unfinished business will be at the top of your list on your next visit?

I’d love to cross the San Francisco Bay and spend an afternoon in Oakland. I haven’t been there’s a lot of stuff going on there in terms of ethnic cuisine, such as Nyum Bai, a Cambodian restaurant that’s been getting great reviews. I also want to check out some of their no-frills taco spots: Taco Panzon, El Novillo and Taqueria El Paisa.

If you could sum up your San Francisco visit in one word, what would it be?

In one word — “surprising!” My last time in SF was almost 7 years ago and this recent visit that Travelzoo sent me on opened my eyes to a lot of new things. It also reminded me just how much I need to go back!