We can deduce this from their asinine post for a politics reporter that includes the line, “You should be less Paula Zahn, more Zoe Barnes.”

Frank, is that you, you sneaky son of a gun? (Oh, it’s not? Well, this is embarrassing.)

For those of you who’ve had your head up your Netflix ass for the past several years, Zoe Barnes was one of the main characters in the first season of House of Cards, the Kevin Spacey dominated tale of a narcissistic politician’s rise to power that’s more addictive than a pound of Freddy’s baby back ribs.

What’s important to note here is that Ms. Barnes had well, a loose way of operating. This included throwing morals and ethics to the wind, blackmailing when necessary, sleeping with people when called for, and generally writing articles with little to no research outside of her (clearly biased) source. So ya, she was a bit of a step back for journalism on the whole.

Oh, and you know what else – she died. She was straight-up murdered.

That’s like telling someone, hey, we want you to be a rich playboy, you know, a real Gatsby, and expecting them to be excited when it’s time to go for a swim.

You know what they say, hindsight is 20/20. And we’re guessing Rare really wished they could have this one back: 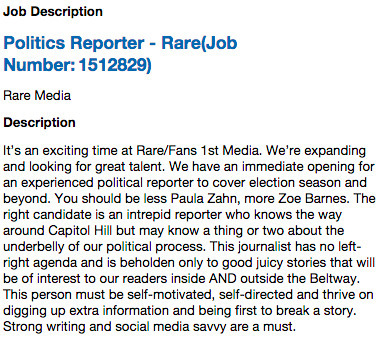 Sleep with sources and publish everything they tell you without checking it? That Zoe Barnes? https://t.co/CpNBHIK13o