Toronto is a patchwork of diverse neighbourhoods.

Each is unique in its own way, which can make it hard when it comes to selecting where you want to live. And based on new data from the Toronto Real Estate Board (TREB), the trendiest neighbourhoods to live in might not be what you expect.

According to the Toronto Star, homes north of Danforth Ave. and east of the Don River are selling much faster than the rest of the city.

The area, which encompasses Playter Estates to the west and rough-around-the edges Woodbine-Lumsden further east, boasts the shortest sale times in the city.

Some homes last for an average of 12 days on the market compared to a city-wide average of 21 days.

South of this are the neighbourhoods of Leslieville, Riverside and Riverdale, which typically spend an average of 13 days on the market.

Toronto realtor Desmond Brown told the Star, “low interest rates and population growth mean that there are more buyers than available homes, so most properties get snapped up fast.” 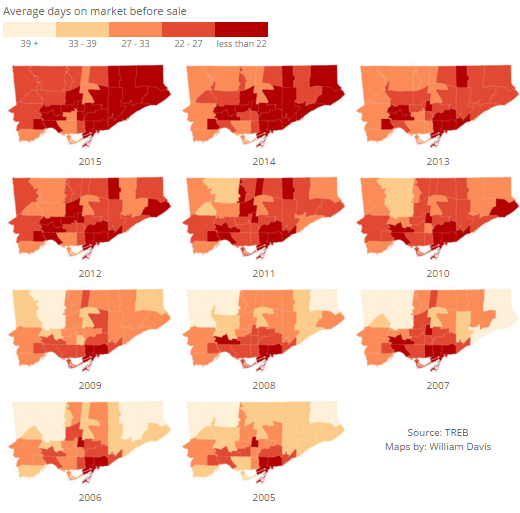 In the last year, Toronto homes spent an average of 21 days on the market, down 10 days from 2005, when they took a full month to sell, the Star reports.

This market trend has affected most neighbourhoods in the city. The only areas that didn’t experience a decrease in sale time were neighbourhoods around the Annex, Casa Loma and Wychwood.

Desmond Brown said the shifts in sale time are based on “basic supply and demand” and that good inventory is currently at a premium.

This is extremely beneficial for home owners who bought at a low price and are looking to sell. They can now reap the benefits of a decade’s worth of gentrification.

So if you’re a first-time home buyer or a younger couple who is looking to upgrade from a condo, Toronto’s eastern neighbourhoods are going to get you the most bang for your buck.