About a month ago we declared man braids to be the next big thing in men’s hair. So big, in fact, that we predicted man buns to be over.

And it turns out were overzealous and incorrect. Whatever happened to man braids? Right, exactly. Turns out a few Instagrams doth not a trend make, and we are an unqualified source for what people should wear on their head anytime beyond this very moment. As for man buns, well, they’re breeding at a lemming’s pace (that’s fast).

Guess who could have told you that? Google.

Marc Speichert, managing director of global clients at Google, recently studied the search engine’s internal data to form conclusions about hair trends in 2015. By analyzing the monthly volume of beauty-related queries from January 2013 to August 2015, Speichert was able to determine three main movements when it comes to the trendiest hairstyles: men’s hair, braids (women), and bold colours.

Because this is Google, the findings dived much deeper as well. 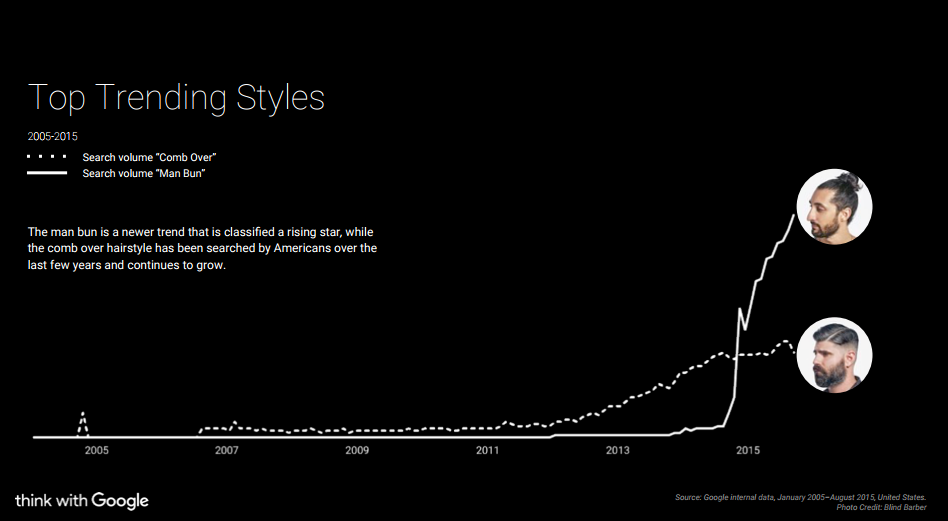 Exploring men’s hair trends, for example, reveals that man buns have a rocketship trajectory with no plateau in sight. It also tells us Harry Styles had the greatest influence on the trend despite Jared Leto doing it first. Leonardo DiCaprio, meanwhile, did it second and failed to yield as many ‘man bun’ searches as Leto. Leo is not cool.

High top fades, by contrast, are just kind of chugging along – somewhat cool but not really since, like, late ’08. Undercuts and combovers have decent potential to remain hip.

For women, its braids that are making the most noise on Google. Females are especially curious about how to craft “box braids” and “goddess braids,” especially in the South. The reason? Demographics. Box braids are traditionally worn by African-American women, of which there is obviously a more concentrated population in the Southern states. 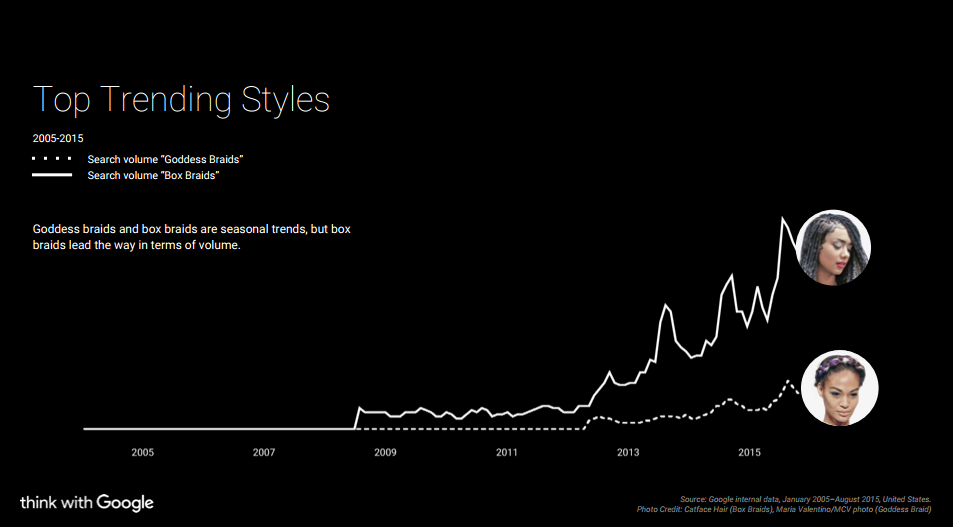 The impact of celebrity influence on hairstyles is also evident: Grey and purple colouring has spiked over the past two years after Rihanna and Katy Perry rocked silver and lavender locks, respectively, at major events. 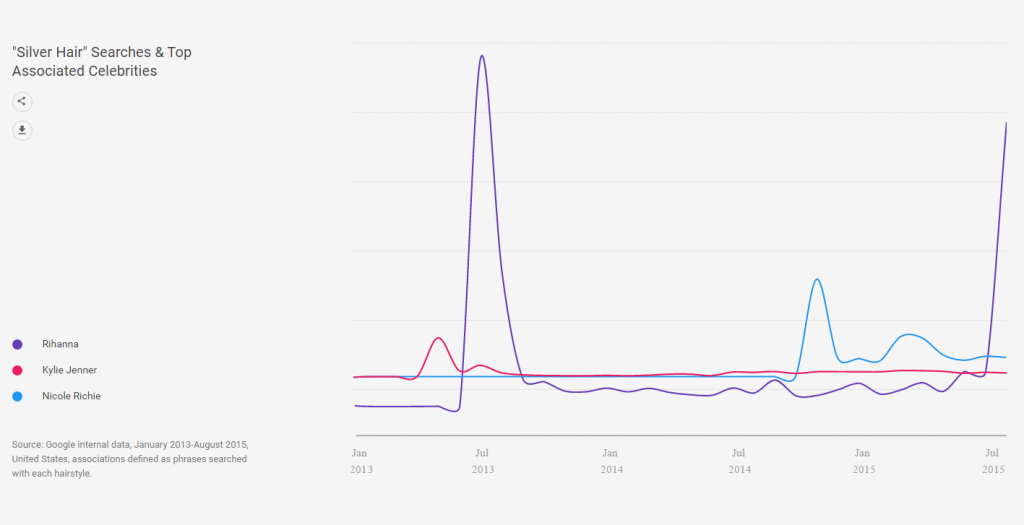 The depth of this data is truly impressive and worth checking out if you’re into analytics and hairstyles (dare you to find that combo in a Tinder bio) so we’ll leave you with some essentials before this article gets out of hand.

Gentlemen, you’ll want to opt for a Caesar, man bun, or samurai to stay on trend. The samurai, by the way, is like the sex and pastrami sandwich of haircuts, an undercut topped off by man bun. The combover’s a safe bet if you prefer to keep it classic, and you can take solace in the fact that over 10 million people have enlisted YouTube for help alongside Google Images tabs of Cristiano Ronaldo, David Beckham, and Justin Timberlake.

For ladies who want to keep up with the hair scene, French braids, twist braids, and mohawk braids are especially in demand. Preferably blue. Or maybe the colour applies to non-braid styles. Hmmm. Better go blue just to be safe.

All of this info, of course, is compiled to help marketers and advertisers more effectively target their products at consumers who wake up and hit the web for hair consultation.

“Many people now turn to smartphones in these I-want-that-look moments, as evidenced by search and video trends,” says Speichert, who considers the resulting data a wake-up call to brands that aren’t reaching consumers in these moments of intent.