James Hinchcliffe is determined to replace Danica Patrick as the face of the GoDaddy.com homepage and, thus far, the odds of this happening look good (as of now, the votes stand at 54 per cent for Patrick and 46 per cent for Hinchcliffe) thanks to his popular “Hinch for Homepage” campaign. The 25-year-old IndyCar driver is confident in his ability (bikini or not) to replace Patrick and was in good spirits at Crush Wine Bar in Toronto on Thursday evening in advance of his big IndyCar series race at Toronto’s Honda Indy tomorrow.

The Oakville native has shot to instant stardom, with his face plastered on Toronto billboards, commercials that air in prime time slots, cameras focused on him at Wednesday night’s Jays game and fans who scream his name on Toronto streets. Hinchcliffe attributes much of this new-found attention to his sponsorship by the popular Internet domain registrar site, GoDaddy.com. This past January, it was announced that Hinchcliffe, who was named the 2011 IZOD IndyCar Rookie of the Year, would replace Danica Patrick as the driver of the #27 GoDaddy.com car for Andretti Autosport. 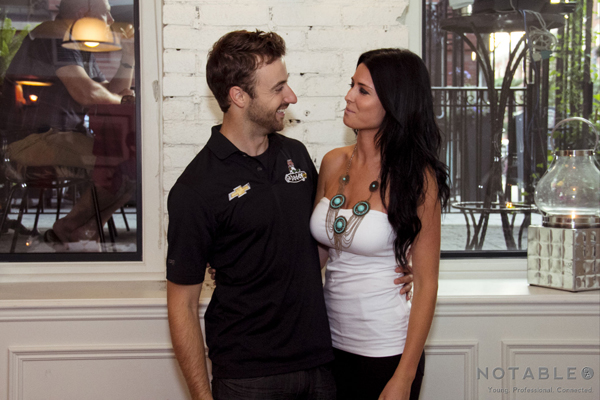 Hinchcliffe credits much of Patrick’s fame to GoDaddy.com and the accompanying abundance of marketing opportunities the sponsorship brings, telling us that “you can have all the talent imaginable, but your success and fame in the IndyCar world is limited without the early backing of a powerful sponsor.” That doesn’t mean, however, that he discredits the importance of marketing himself, calling his job  “20 per cent racing at 80 per cent business.” Whereas most racecar drivers have generic webpages, Hinchcliffe takes his to a whole new level. Hinchtown.com, the website owned and operated by Hinchcliffe, is full of dozens of videos and podcasts of the star, who is also very active on social media and has been for years. He certainly knows the importance of being a good public figure and captivating spokesperson.

Hinchcliffe definitely has the charm and looks for the role, but this doesn’t mean he is just a pretty face (can we say that?!). Due to the incredible mental focus and quick reaction time required to manage an open-wheel car, Hinchcliffe tells us “the fastest guy doesn’t win; the smartest guy wins.” Throughout his high school career at Oakville Trafalgar High School, he managed to fulfill an agreement with his family to maintain an 80 per cent average. He later studied commerce and economics at McMaster University, where he left in his second year to pursue an opportunity to racing full time, at what Hinchcliffe calls the “equivalent of the OHL” (Ontario Hockey League) for IndyCar drivers. The university granted him a five-year deferral, but, just shy of this deadline, he made it to the IndyCar world. This year marks his second season at the professional level. 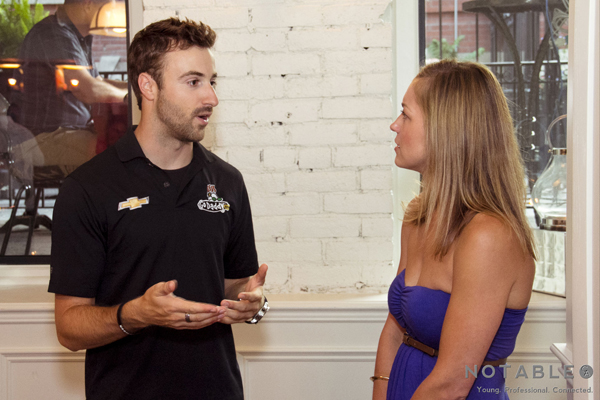 In addition to the mental focus, the job of a professional IndyCar driver is a physically demanding one; and it would be a huge mistake to think Indy Car drivers are not athletes…trust us. In fact, many compare the sport of IndyCar driving to performing a triathlon. Managing the weight of the car, the wheel and your own body is a physically exhausting job, especially travelling at speeds of over 300 kilometres per hour. Unlike sports like football or hockey, where athletes get a break every few minutes, IndyCar drivers exhaust their muscles for two-hour durations of time. Due to such physical demands of managing an open-wheel car, the career life of an IndyCar driver is comparable to most professional sports, and Hinchcliffe tells us that it is difficult to find a driver who is in their late 30s. As such, Hinchcliffe, who now resides in Indianapolis, spends the off-season doing an intense and rigorous workout regime, training at least 4-5 days per week in a workout that includes swimming, running and plyometrics, in addition to strength training.

Now back in his hometown, does he feel the pressure? Surprisingly, not so much. He tells us he forgets he is in Toronto once in the car but admits his schedule is more hectic when he is in town, balancing friends, family, appearances and everything in between. Although he jokingly says he would like to move to Australia to be a “beach bum” when he retires (we wonder if that has anything to do with his current knock-out girlfriend, Sydney native Kirsten Dee), he says he would also one day like to pursue a career in broadcasting. 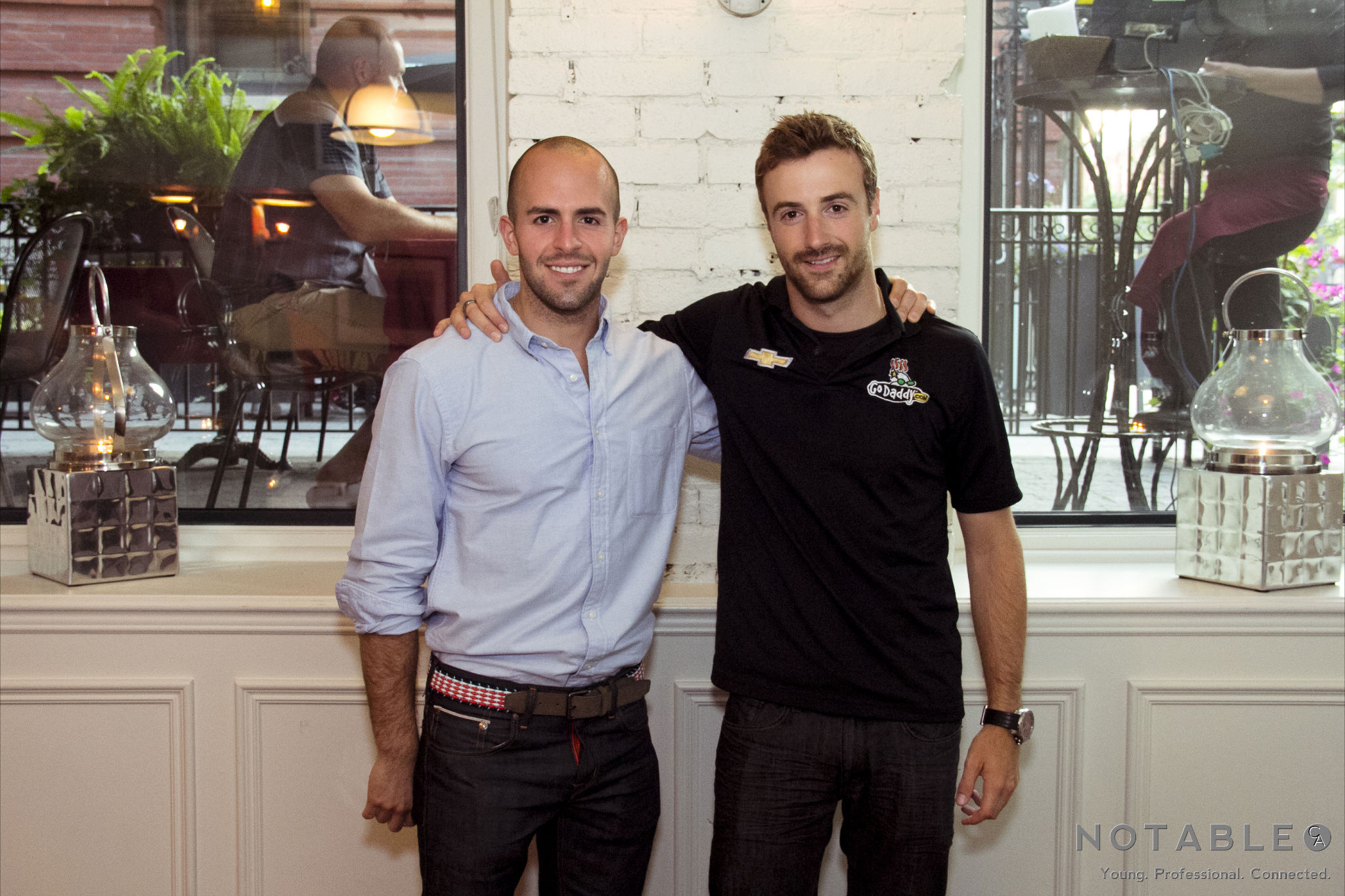 The DL on James:

– He rarely receives speeding tickets when driving his Chevy Tahoe, a car he calls “perfect for road trips.”

– He is passionate about scuba diving, and calls the time spent under water a time where he can “tune out the world and decompress.”

– Like many Toronto-based young professionals, he spent Canada Day long weekend at his family cottage in Muskoka.

– He cites one of the perks of the job as the opportunity to race all over the world, in places like Malaysia, Indonesia and South Africa.

– To prepare for a big race, thanks to his uncanny ability to fall asleep anywhere, he has a cat nap for 15-20 minutes beforehand. Once he wakes up, the race is all that he is focused on.

– He says he is “superstitious of being superstitious,” when it comes to pre-race rituals, like putting a certain glove on first or entering the car from a particular side.

– He sticks to a strict pre-game meal, usually comprised of basic pasta with tomato sauce and basic broiled chicken.

– At first, the most nerve-racking part of the job for Hinchcliffe was sitting in the car (with shaking hands) waiting for the game to start.

– He admits that the driver’s meeting is the most stressful time. The higher quality he performs, the worse the meeting.

– He would still be racing if he couldn’t drive professionally.