We had the chance to sit down with celebrity fitness guru and Toronto native Harley Pasternak at the CityTV studios in Toronto, where he in town to promote his new CityTV daytime series The Revolution. Pasternak has become a staple on the Hollywood fitness scene and is responsible for some of Hollywood’s hottest bodies (hello, Halle Berry!) and weight loss success stories (case in point: Jennifer Hudson). He sits on Bill Clinton’s committee for childhood obesity, designs fitness video games as well as a line of shoes for New Balance and is a spokesperson for the athletic footwear brand, as well as Coca-Cola’s Fuze sugar-free beverages. To date, he has made appearances in more than 20 countries.

Celebrities and critics alike have raved about Harley and his famous 5-Factor lifestyle program, which has landed him on The View, The Oprah Winfrey Show, The Tyra Banks Show, Access Hollywood, Extra!, Entertainment Tonight, VH1, CNN, E!, Rachael Ray, and Next Top Model.

He also makes regular appearances on NBC’s Today show and ABC’s Good Morning America. Here at Notable.ca, Harley provides a great example of a young professional living the ultimate 360-degree balanced lifestyle and YPs can definitely take a page or two out of his book. Luckily, he had a few words of wisdom for us appearance-conscious young professionals.

According to Harley, the biggest challenge and misconception facing today’s YPs when it comes to health and fitness is that, especially once we approach our late twenties and early thirties, we forget that we won’t be young forever and are in some ways too extreme in our workouts to allow for long-term sustainability.

Things like intense boot camp, 3-hour workouts, crash diets and cleanses will do more long-term harm than immediate good, he tells us. We ultimately want to be active for our entire lives. If we workout with such crazy intensity, we can easily and prematurely wear out our knees, hips and joints, hindering ourselves for later in life and preventing us from doing the activities that we are used to. A basic rule of Harley’s is that if it isn’t something you can sustain for your entire life, then don’t do it. We are no longer in our early twenties and the sooner we accept that, the better. Gulp.

For women, Harley tells us that one of the biggest misconceptions is that you can spot reduce or spot strengthen by strategically trying to target certain areas of the body; or that hours on the elliptical at a time will make the weight slide right off.

Wow, we’ve clearly been wasting a lot of time. Physical fitness, he tells us, occurs all over the body simultaneously as the result of regular cardio and diet, not over-exhausting ourselves as we do cardio for the entire episode of The Bachelor.

A misconception among men and women alike is that big weights equal big muscles.

With men, he says, it is important to switch up weights. Many men think they must stick to a specific program rather than to adopt a generally active and healthy lifestyle and they often work much more intensely than necessary. For both men and women, he suggests mixing up your workout routine because over time you will burn fewer calories and build less muscle if you stick to the same patterns.

Workouts than leave you with the biggest “burn” the next day are not always the most effective.

Harley advocates against the common no pain, no gain attitude when it comes to fitness. With resistance training, pain is not necessarily required for a good workout.

Harley believes that fitness doesn’t need to be dedicated to a specific time and place and only requires 25 minutes of activity five days a week to achieve results. 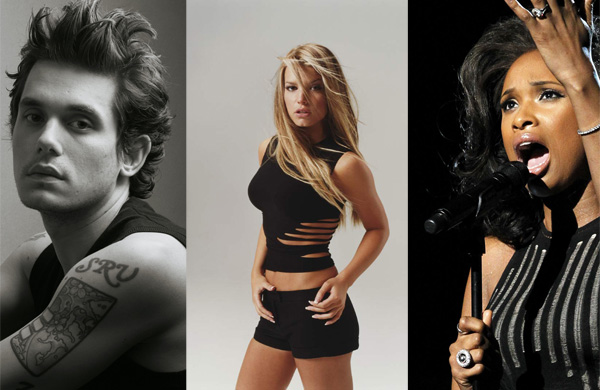 For the time-strapped young professional, Harley recommends incorporating fitness into your every day routine.

Sometimes a workout can require no equipment if you can’t quite commit to that gym membership. This can be something as simple as taking the stairs, the subway or bike instead of your car, parking further away from the door than necessary and generally getting creative with fitness as well.

If you flip through the pages of any magazine you will see the results of the Harley’s 5-factor program from his roster of celebrities (including Jennifer Hudson, John Mayer and Jessica Simson, above). Harley’s 5-Factor is a lifestyle that gives real people Hollywood results and is perfect for the time-strapped but health-conscious young professional. Neither YPs nor celebrity clients have the time to commit to an extensive workout regime, but with the 5-Factor plan they don’t have to.

The 5-Factor principles: work out less (25 minutes per day, 5 days per week), eat more and never be hungry (5 meals a day), and take a cheat day (satisfy those cravings guilt-free).

The 25-minute workouts can be enjoyed in the comfort of your own home. It is commonly known that diet is just as important as fitness in health and appearance but many YPs are too extreme with dieting as our metabolism inevitably begins to slow down. Harley’s 5-Factor meal plan seems geared toward the busy, urban YP. His site and cookbooks feature 5-Factor recipes that include 5 ingredient recipes. Harley has created hundreds of recipes like 5-Factor Lasagna and Greek Pizza Roll Up, to name a few, to ensure mealtime is easy, healthy and satisfying. Each meal includes 5 key ingredients: protein, fibre, healthy carbs, a healthy fat and a sugar-free beverage.

Harley has also custom-designed a line of snack bars and chips that satisfies one snack time requirement (along with a sugar-free beverage) on the 5-Factor Diet, with each containing 10g of protein, 5g of fiber and under 10g of sugar. These are a healthy Godsend for those missed lunch breaks, an on-the-go snack or a late night energy boost while (still?!) at your desk.

In terms of a generally healthy life, or what we here at Notable.ca like to refer to as “Living Life,” Harley says that success means doing things you want to do and not that you have to do, joking that the best part of his job is not having to wear a suit. Even when life gets crazy, as it does both here and in Hollywood, he encourages YPs to take the time for the things that matter. For Harley, this means having breakfast and dinner with his wife every day.

We are sure to see more and more of this fellow YP as his career shows no sign of slowing down. Thanks for the advice, Harley.

Tune into The Revolution airing daily at 2pm on CityTV. Set your PVRs.