Christmas is so far removed from its traditional roots these days that most people probably have no idea what this whole fiasco is about.

Like, did you know that December 25 is so more than just an annual shopping deadline? Or merely the day before Boxing Day? Or that in some parts of the world they don’t call it ‘Thanksgiving Part II’?

You heard it here first. Here are 7 other things about Christmas you probably didn’t know.

Starbucks did NOT declare war on Christmas in 2015.
Despite widespread demand for ground troops in all 23,000 Starbucks locations worldwide, the most threatening outburst of Christian aggression since the Crusades was defused when the secular coffee chain explained their red cups were a purely arbitrary design choice.

No one really knows when or where Christmas trees came from.
The history of Christmas trees is as muddy as your memory after a night of spiked egg nog, and the only safe assumption is that they originated in Europe about 1000 years ago. Not coincidentally, the first Christmas tree on record was documented in Riga in 1441, one year after the invention of the printing press. Martin Luther, himself an avid user of Johannes Gutenberg’s Protestant Reformation propaganda-spreading device, is credited with introducing the first in-home Christmas tree. Sadly, clean eating diets and fire safety regulations have encouraged the gingerbread, sweets, gold covered apples, and candles that used to adorn trees in the 15th century to be replaced by the made-in-China kitsch you now find on modern Christmas trees. Christmas cards are the lifeblood of print.
While printing ink on paper played a key role in Luther-era life, this delicate practice is preserved exclusively by the Christmas card industry today. Every year, the distribution of more than three billion Christmas cards is responsible for employing U.S. postal workers during the holiday season. That’s nine cards for every person in the United States. If you receive less than nine cards this year, just know that you fall below the average level of love and appreciation expressed by others’ loved ones.

Couples love to break up before Christmas.
Reckless spending, too much time with others, travel nightmares, family strife, opening a box of disappointment – all of these factors individually have the capacity to end a relationship. Christmas rolls them all into shiny holiday ornament from hell, so it’s no surprise that one of the two most popular times of the year for couples to break up falls a few weeks before JC’s birthday. Christmas Day, meanwhile, is the least common day to be dumped – that honour is reserved for another month and a half, just after Valentine’s Day.

Mistletoe is a parasite.
Despite its designation as super romantic festive foliage, mistletoe actually finds life parasitically by deriving nutrients at the host’s expense. Indeed, it is the tapeworm of plants. It’s also sh*tty in other ways: in Anglo-Saxon, “mistel” means “dung” and “tan” means “twig,” so its literal meaning is “dung-on-a-twig.” And if that’s not enough to make it a contender for most overrated plant on earth, its berries are toxic to humans. We should really be kissing under something else. Festivus is real.
Ah, a holiday for the rest of us. Everything about this Seinfeld-conceived alternative to the commercialism and pressures of the Christmas holiday season is amazing – the feats of strength, airing of grievances, miracles, and very high strength-to-weight ratio aluminum pole – but perhaps most incredible is the fact that people really do celebrate it. Festivus poles have been displayed at the Wisconsin and Florida state capitol buildings, as well as on the side of Google when searching ‘festivus’, and somewhat-renowned author Allen Salkin wrote an entire book devoted to its growing popularity. The Baltimore Ravens also considered Festivus their 2000 season’s goal and US Representative Eric Cantor once hosted a Festivus fundraiser.

The holiday even registered as a top trend on Twitter in 2010.

Now, go make that donation to the Human Fund. 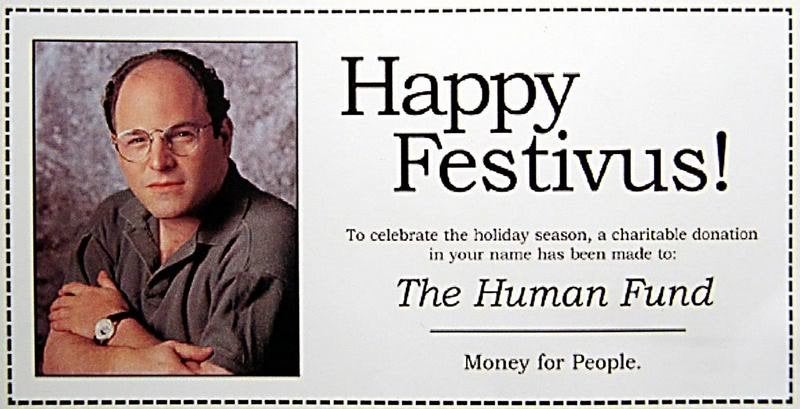