The feature has come under fire recently with claims that the social media giant was suppressing stories of interest to conservative users.

In an effort to reduce any biases and controversy, Facebook announced that it would significantly reduce the role of editors in programming the trending section.

At the time of the bias allegations, Mark Zuckerberg assured the world that he and the company were 100 per cent “committed to building a platform for all ideas.” Decreasing the chance of human error, the new move will hopefully remove any such bias or perceptions of bias.

The company reportedly laid off 15 trending news editors on Friday. 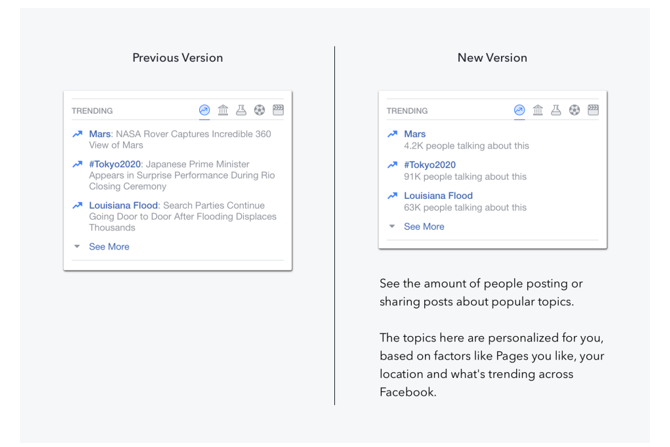 Facebook’s trending topics are selected by an algorithm that assesses how often they are posted or shared, and the lists are reviewed by editors.

While the lists will still be reviewed by editors, the difference now is that the features will no longer include headlines or summaries written by people.

Now, Facebook will now display each topic along with the number of people currently discussing it, an excerpt from the news article and a selection of user comments.

“Our goal is to enable Trending for as many people as possible, which would be hard to do if we relied solely on summarizing topics by hand,” the company explained in a statement posted to its newsroom. “A more algorithmically driven process allows us to scale Trending to cover more topics and make it available to more people globally over time.”

While the company maintains its stance that they found no systemic bias in the claims, they say that the new changes allow the team to make fewer individual decisions about topics.

Apparently, however, the removal of human decision also leaves room for error. Today, the company came under fire for already trending fake news.

Under its old, human-assisted guidelines, Facebook trends had been monitored to weed out potentially offensive or inappropriate items. Now, it seems that what the social media giant considers newsworthy needs to be taken with a huge grain of salt.