Known for his 4 a.m. workouts and posting impressive shots at the gym accompanied by motivational messages, Dwayne ‘The Rock’ Johnson is someone we could all learn a few things from.

The hugely successful pro wrestler turned Hollywood star believes it’s his early wake-up calls that help him get a head start on the competition – and now he wants to help you get there too.

Johnson has just released The Rock Clock, an alarm clock app for smartphones that’s available on both Android and iOS and lets you set long-term projects or time-specific goals. 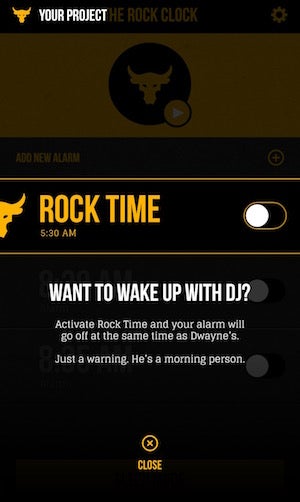 The app comes equipped with a number of ringtones that Johnson created — he even sings and plays the guitar in a few of them. But be warned: waking up to The Rock’s acoustic guitar-backed “Good Morning Sunshine” could result in a very weird start to the day.

The most interesting feature lets you sync up your daily sleep cycle with his on “Rock Time.” This means your alarm will go off at the same ungodly hour as The Rock, which could serve as serious morning motivation or just make you repulse him completely.

From this historic day forward – I’m waking your ass up;). The #RockClock has arrived. This app is FREE. Download NOW in my bio. We’ve spent over a year engineering this app for you. Our goal was create a free, direct, uncomplicated, cool, motivating app to help us all get after our goals every morning. I also wanted to totally disrupt the traditional “morning alarm” system we all use on our phones. We created fun, cheesy bad assery alarm tones (yes, that’s me really singing and playing guitar to wake your ass up;) and one of my favorite features of the #RockClock is the dreaded snooze button does not exist. Absolutely BEST part of #RockClock is that I’ll be able to track all your goals and you’ll track mine. We’ll chase our greatness and kick some ass. Or get our asses kicked;) Either way, we’ll do it together. Enjoy the free app, share your goals with me and world by using the hashtag #ProjectRock. I’ll be shouting you guys out personally via video messages on this app, so let’s chase our greatness, get after it and as always have some fun along the way. Aaaaand one more thing.. there’s also a function where you sync your phone with mine and you wake up when I wake up. But your candy ass probably ain’t ready for that kinda magical action ??. #RockClock #ProjectRock #ByeByeSnoozeButton #HelloGreatness   A video posted by therock (@therock) on May 2, 2016 at 6:37am PDT

The key to the app is that there’s no snooze button. In other words, when The Rock starts yelling that it’s time for you to get your ass out of bed, you better get up because he won’t stop until you’re awake and crying in sleep-deprived frustration on your bathroom floor.

Can you smell what The Rock is cooking? Success, that’s what.