A summertime scenario: You arrive at home from the grocery store with a case of cold ones, sober, ready to fire up the ‘cue with a couple buddies. Ninety minutes later you’re ON THE WAY TO JAIL.

While it’s an unlikely scenario, Canada’s current drunk driving laws leave room for the possibility that you can be charged for intoxication while operating a vehicle despite not actually doing that at all.

The matter was brought to light by a since-deleted tweet from Justice Canada: 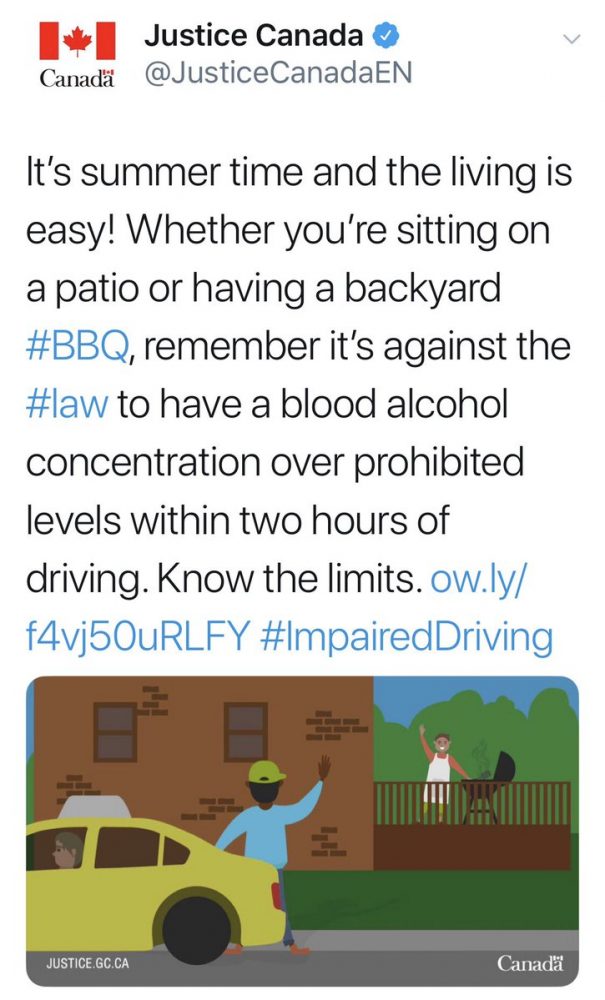 That means police can charge someone who was driving sober but managed to get themselves drunk within the following two hours.

It should be noted that it is highly unlikely – perhaps even illegal – for the cops to crash your BBQ and start dropping DUIs. Justice Canada clarified the intent of the law in a follow-up statement after the tweet generated significantly raised eyebrows:

“As far as the law goes, under the old laws, drivers could argue they could beat an “over 80 mg” charge if they had several drinks right before driving because the alcohol wouldn’t affect them until after they drove. The new laws cover this situation and drivers can be convicted if they have a blood alcohol concentration at or over 80 mg within 2 hours of driving.”

CORRECTION: We wanted to clarify the facts around a tweet that was issued yesterday relating to the 2 hour rule under the new alcohol-#ImpairedDriving laws. These laws aim to keep our roads safer and save lives. Find out more here: https://t.co/68c6VteXqc pic.twitter.com/Yqpr7FXCNy

You may remember the intricacies of Canada’s drunk driving legislation having recently played out when a court ruled that a B.C. woman’s rights were violated when police forced her to take a breathalyzer at home two hours after driving.