The world was a complicated place and he was just in his second year of what would become a 16-year reign as Canada’s Prime Minister. Nevertheless, he took the time to address students then and today in a letter that remained buried until this week. It was found when a Vancouver elementary school unearth a time capsule that had been untouched for 50 years.

The letter, “to the students of 1969 and of 2019,” touches on the big issues of the times – the prospect of nuclear disaster, civil rights, and breakneck technological advances, like landing on the moon. In many ways, the topics are as prevalent today as they’ve ever been. Except instead of the moon, we’re trying to colonize Mars.

“Writing this message in a week that has seen man’s first hesitant step on the moon, I would be foolhardy to predict the conditions of life on this planet in fifty years,” wrote Justin’s dad.

“I am sure that, barring a nuclear catastrophe, the astounding progress in technology which we have experienced over the last half-century will continue and probably accelerate.”

“I only hope that it will be matched by similar progress in man’s historic struggle for freedom and justice in all parts of the world. The achievements of the students of 1969 and of their successors in working towards these goals will be their most important legacy to the students of 2019.” 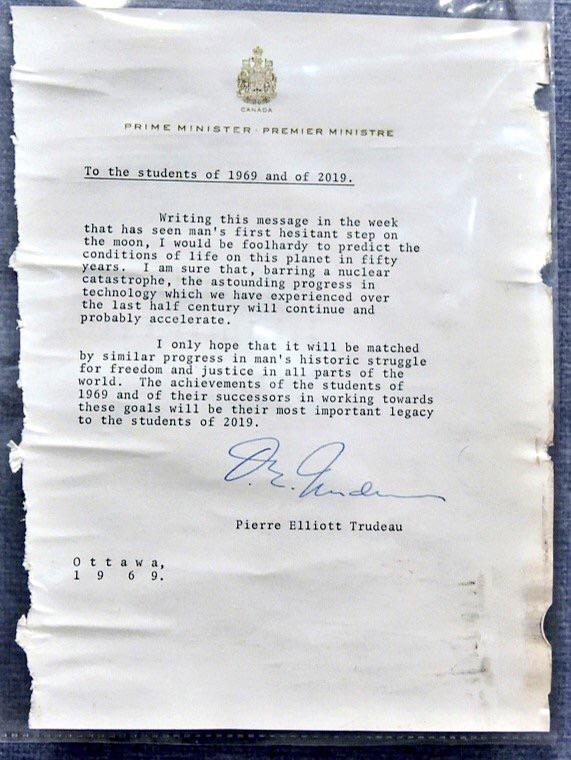 I dread recalling what kind of idiotic flotsam we donated to the dirt in our elementary school time capsule.