Admit it, you’ve sat around with some pals at least once and schemed about this insane concept where, like, people go to this place that only serves cereal. Then you thought better of it a few minutes later and the idea never materialized.

Well, two entrepreneurial Irish brothers actually followed through with Jerry Seinfeld’s wet dream when they opened Cereal Killer Café in Shoreditch, East London, an indie shop that boasts over 100 different cereals from the UK and around the globe. It even offers 12 different types of milk and over 20 toppings.

Seems like a harmless, even pleasant, idea. But as owners Alan and Gary Keery found out over the weekend, a considerable group of misguided individuals view their business as a symbol of the neighbourhood’s gentrification – and promptly went ahead with torch-and-pitchforking the place. (OK, they just vandalized it with paint, cereal (!), and a few effigies).

The Cereal Killer Café was the most intensely targeted shop during an anti-gentrification protest on Saturday night that saw hundreds of people hit the streets to voice their anger over the rising cost of housing, food, and other essentials in Shoreditch, which is currently having its Ossington moment. 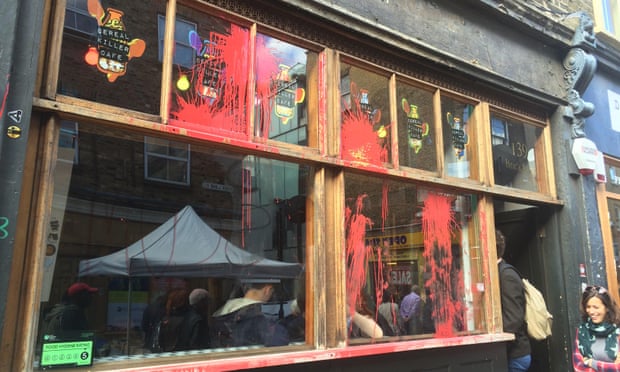 Photo: Josh Halliday for the Guardian

There’s plenty of reason to feel sympathetic to their cause, of course – as one columnist puts it, “the petty vandalism that occurred pales in comparison to the brutality of the gentrification that is destroying the lives and demolishing the homes of some of London’s most vulnerable people…” – but the attack was way off target.

Sure, $6 is a pretty insane price for a bowl of cereal, but we’re talking about a blip on the radar here. This was an indie cereal shop in a city “filled with chain-restaurant mediocrity,” a place where a cup of coffee costs the same price, and a beer sets you back more than $10. If you’re pissed off about inequality and social cleansing in your neighbourhood, take it up with policymakers and government reps, not small businesses. And when was the last time vandalism solved anything?

In fact, attacking the place has had the opposite affect:

Open as normal today guys, come down to see our new shopfront #makeover

Their website’s also down from overwhelming traffic, which is usually a sign that you’re doing something right. Even if charging minimum wage for a cereal breakfast for two is not it.