One of those few is Dan Fricker, who currently works as the Senior Manager of Social Media at CBC and Instructor of Social Media Strategy at the University of Toronto. He also recently won both the Social Media Award and the Microsoft Award for Productivity and Collaboration at the 2015 Notable Awards.

Introduced into the Notable Awards roster this year, the Microsoft Productivity and Collaboration Index Award was presented to a Notable nominee who has successfully integrated technology into their daily life and is using it to enhance their productivity, collaboration and creativity. It is a measurement tool that uncovers how individuals are using technology in unique ways to do great things.

In its inaugural award year, Microsoft Canada selected Dan Fricker based on his overall index score and his enthusiasm for integrating and using technology to enhance how he approaches social media strategy and implementation in his career at CBC, as well as keeping him organized in his teaching role.

“Dan Fricker is an example of someone who embraces technology and finds new ways to enhance his own productivity,” said Chitra Anand, Head of Communications at Microsoft Canada. “We know that the way people are working has changed and will continue to change.  Dan incorporates technology into his professional and personal life and regards it as an enabler to empower him to do and achieve more.” 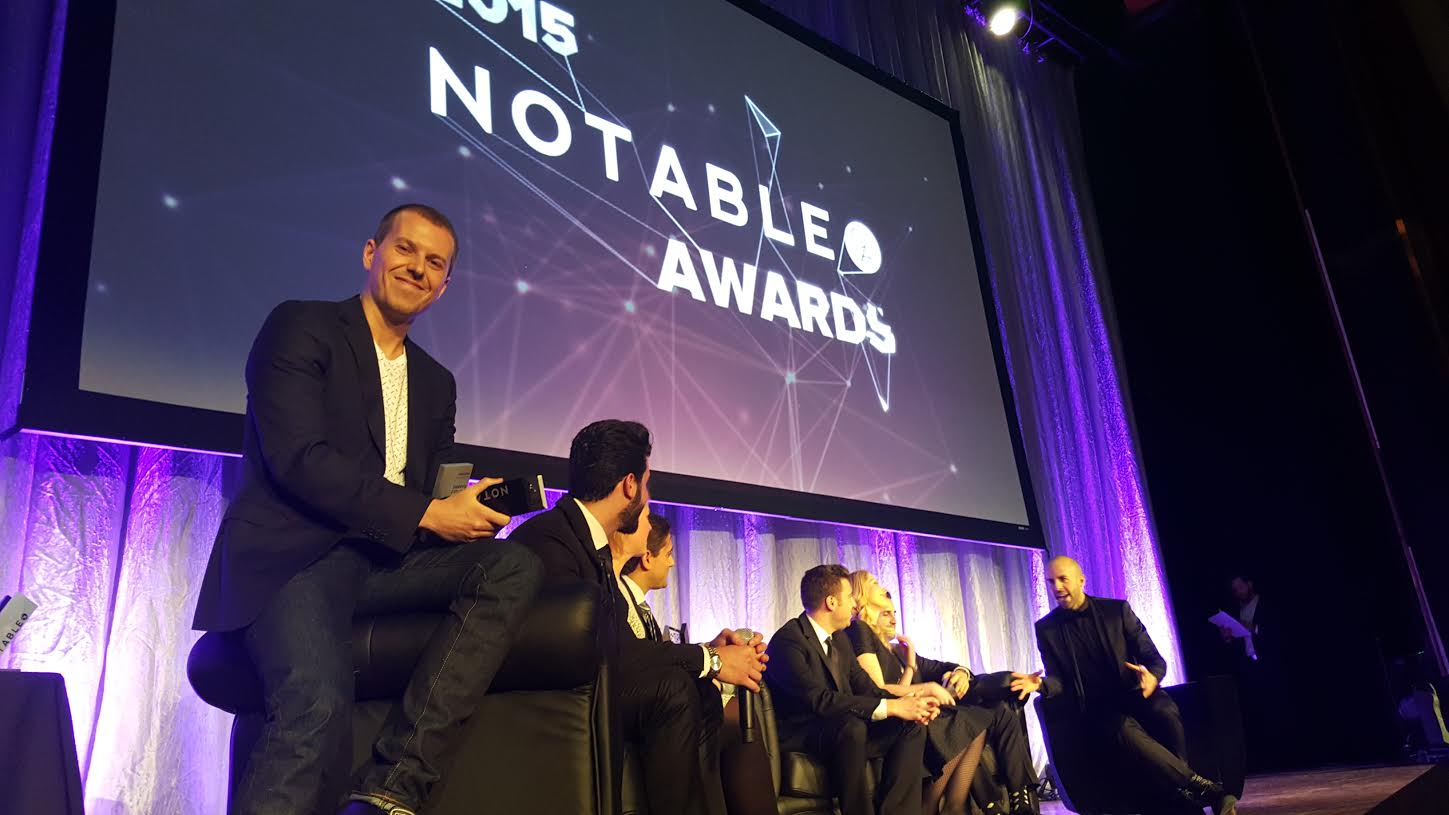 He is also a master of engaging online audiences and connecting people with brands – a craft he’s perfected over the past decade.

That’s right, he was on the scene when Zuckerberg was just coming out of his dorm room.

So we caught up with Dan to find out what it takes to stand out in the great big world of social media and which strategies you can apply to your own brand, be it personal or professional…

Describe what you do in less than 140 characters. Go
I find ways to use digital channels to better connect people with brands.

What, in your opinion, is the best social media platform for engagement?
I suppose that depends on your definition of engagement.

Twitter was sort of the original social customer service channel – it’s mostly public, initially it was primarily text-based. The @replies functionality was ideal for conversational, 1:1 dialogue.

Instagram offers us a huge engagement rate when it comes to overall post interactions – so looking beyond just replies/comments, and including likes. We have somewhat smaller audiences on Instagram compared to our other channels, but these fans like our posts a whole lot more – arguably because simple, compelling visuals are an easier form of content to engage with.

But Facebook when you get it right – apply the best practices, align yourself with the latest algorithm preferences, hit the emotional sweet spots – offers the most potential for posts to take off simply because it has the larger user base.

What are your top three social media practices?
Know exactly who you’re trying to reach.

Know specifically what you’re trying to get them to do.

Know which emotion you’re using to help tell that story.

What’s one social media platform people aren’t paying enough attention to?
Chat apps, in general. So in Canada that could include Facebook Messenger, WhatsApp, Skype; the 1:1, private, #darksocial platforms. There’s been a significant rise in users over the last year or so, and the majority of top mobile apps used across the globe are messaging apps. Brands are still trying to figure out their best play, though – how to venture into this space without being intrusive.

Who is someone (person or company) you think everyone should be following?
I always seem to point to Oreo as a case study. They really helped start the discipline of real-time marketing with their dunk-in-the-dark tweet a few years ago at the Super Bowl. But even beyond RTM, they (and their agency) still do a really great job of being topical, actually using their social channels to participate in what people are talking about on any given day – which, not surprisingly, often has absolutely nothing to do with cookies. They’re just using social to be social. Which is what counts.

What’s the biggest shift in you’ve seen in social media in the last five years? What do you expect it will be in the next five years?
Five years? Try five months. Five weeks, even. In the last five weeks alone, Twitter’s moved to an algorithm-based feed, Facebook’s talked about plans to go public with Instant Articles, they’re now opening up ads in Messenger, Snapchat started measuring ads in GRPs to compete with conventional broadcast networks… the pace of change in this industry is incredible. That’s the challenge (and the fun): to stay current in a space that’s ever-changing. Who knows where we’ll be in five years. In the next five months though, I can confidently predict you’ll hear more talk about chat apps, and brands experimenting with customer service and content distribution.

What’s an example of the most powerful social media uses you’ve seen (i.e. a campaign, a poignant tweet, something marketing-related)?
There was a campaign a few years back on Twitter called “Surrender Your Say” run by the Tourette Syndrome Foundation of Canada. They borrowed Twitter accounts for 24 hours and posted these garbled, nonsensical tweets meant to raise awareness of what it`s like to live with Tourette Syndrome.

I point to that often for no other reason than because it was designed specifically for Twitter; it was a channel-centric execution. Campaigns like that are great case studies– the ones that don’t just repurpose creative from other mediums and don’t take 30-second TV commercials and just plug them onto Facebook. Social doesn’t work that way – square peg round hole.

Or, even something as simple as an Instagram post in December of a beardless Santa cartoon. In the caption, it asked you to double-tap to give Santa his beard. Sure enough, on Instagram, when you double-tap to like something, a heart pops up, so for a moment it’s as if a white beard appears over Santa’s his face.

I’m a fan of those types of campaigns – clever, simple, channel-centric.

If you’re interested in a job as a social media manager, what should you be doing to make it happen?
Like any job, proven experience working in this space is good, from strategy all the way down to execution. It’s a bit of an art knowing how to tell a story in 140 characters or less, or how to frame a square photo and making sure you’re using with the right @handles, hashtags, vanity URLs, and emojis. So someone who’s done it, who’s natively familiar with the platforms, is a huge asset.

How closely should the social media team be working with the rest of the company?
On a scale from 1 to ‘very’? Very.

It’s crucial. Social is a resource, it’s something that touches all areas of the business. It should never be treated as an entirely standalone, separate team or function. Social is marketing, it’s publicity, creative, and customer service; its issues and brand management, even HR. It incorporates every possible external consumer-facing function.

How many much social media is over saturation for a company? Or can you never have too many social media outlets?
It really depends on your resources. First you have to ask yourself what your team has the capacity for, what kind of bandwidth you have to manage social. It’s not just as simple as sending a bunch of tweets off into the ether – what are our goals, who are you trying to reach, what are you trying to get them to do? Then, how are you actually going to deliver on that? The execution part is a time commitment. You don’t want to spread yourself too thin – the last thing you want to do is create a social channel to connect with your customers and then not show up for the conversation. Do what you’re able to do well.

Is there an optimal time to post? Do those times differ depending on the platform?
Test and iterate. There’s no one single answer to that question. It depends on your audience, your product, the platform – a ton of variables. Use your own data to answer that question.

And there you have it – a cheat sheet for getting the most out of social media from one of Canada’s most respected industry insiders.