If you’re among the remaining few who still don’t know who Tatiana Maslany is, you soon will.

The Canadian actress just took home an Emmy for her role in “Orphan Black” at last night’s award ceremony in Los Angeles. 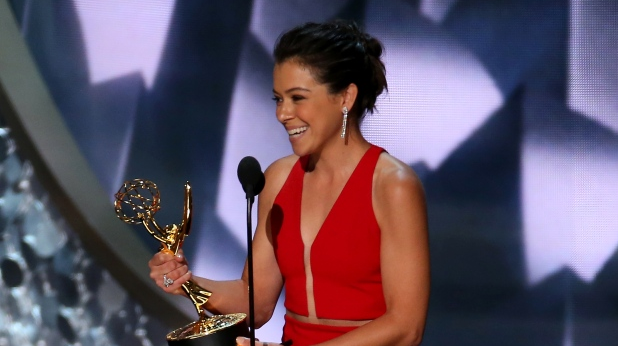 Beating out stars from “House of Cards,” “Empire,” “Homeland,” “How to Get Away with Murder” and “The Americans”, Maslany accepted the trophy from fellow Canadian actor Kiefer Sutherland for Outstanding Lead Actress In A Drama Series for her role in the addictive sci-fi series.

She said she felt “so lucky to be on a show that puts women at the centre.”

By women, she means a variety of women, most of which are played by her. Those familiar with the twisted and gripping show have witnessed Maslany’s incredible range for themselves, as the 30-year-old Regina-born actress plays an assortment of clones with distinctly different personalities and accents.

The show – filmed right here in Toronto – airs on Space and BBC America.

This was Maslany’s second Emmy nomination and first win. She has also won an ACTRA award for the role in 2015. It’s safe to say it probably won’t be the last time she leaves a high-profile awards ceremony with a shiny piece of hardware.