Think of some of the most influential people of the last 25 years and you may come up with the name Steve Jobs.

But let’s imagine for a moment a world without the technology entrepreneur (and yes, I have been watching ‘It’s a Wonderful Life’ far too much lately).

Did you forget to bring a selection of CDs with you today? Looks like you’ll be listening to Fleetwood Mac for the seventh commute home in a row. And wasn’t there something you were supposed to do tonight after work? Better get your Filofax out and leaf through the pages to find out what’s on the agenda. Man, that’s a nice sunset tonight. It’s too bad you didn’t bring your camera with you today (you get the idea).

Lucky for us, one of the greatest innovators of the last century was born. But if the world keeps saying ‘no’ to migrants looking for a better way of life, we may be scuppering our chances of bringing in bright, dynamic citizens who have the capacity to do great things.

Steve Jobs was the son of a Syrian migrant who came to America after the Second World War. And Banksy, the political graffiti artist, has shown the world with his latest piece that Apple may never have existed had we refused his father entry.

His latest artwork shows Jobs, in characteristic black turtleneck and jeans, with a black garbage bag swung over his shoulder and an original Apple computer in the other hand.

The piece was sprayed on a wall in the Calais refugee camp, knowns as “The Jungle,” in an effort to address the negative opinion of the thousands who are living there. 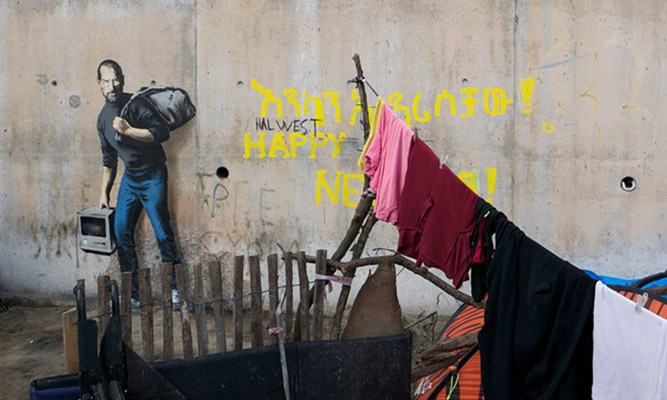 The anonymous artist said, “Apple is the world’s most profitable company, it pays over $7bn (£4.6bn) a year in taxes – and it only exists because they allowed in a young man from Homs.”

Steve Jobs’ biological father, Abdulfattah “John” Jandali, was born into a Muslim home and grew up in Syria but arrived in America where he went on to study economics and political science, and later a PhD at the University of Wisconsin.

Although Steve was raised by adoptive parents from birth, Banksy’s artwork serves to humanize the refugees that some fear are simply cashing in on an opportunity to relocate.

In his accompanying statement, Banksy said, “We’re often led to believe migration is a drain on the country’s resources but Steve Jobs was the son of a Syrian migrant.”