Cassandra Blackwell is good at the internet. During last year’s presidential campaign she had a viral hit using Donald Trump’s Isis rhetoric to ward off unwanted attention on dating apps. Her recent explanation why she posts thirst traps (an article which was headed off by one of her favorite photos) made it to the front page of Snapchat.

Blackwell’s sad core content, risque photos, and drole social commentary have landed her over five thousand followers on twitter. Blackwell’s biggest viral hit came a few years back with Beyoncify my Boyfriend. After a nasty break up, Blackwell photoshopped Beyonce over her ex-boyfriend in all of the couple’s shared photos. The goal was to remind herself that she – like Bey – is a strong/independent woman. After she posted the photos online they quickly spread to every corner of the internet. The photos were picked up by Buzzfeed, Time, and People, among others.

One person who saw the Beyoncify my Boyfriend photos was comedian Aziz Ansari. The Master of None Star liked the idea so much that he featured the story in his bestselling book “Modern Romance”. Ansari did not ask Blackwell whether or not it was okay to mention her, something all other publications who had shared the content had done. That in itself was annoying for Blackwell, before even addressing the fact that Ansari was reportedly paid over three million dollars for the advance of “Modern Romance”.

It’s been nearly three years since Blackwell replaced photos of her ex with Beyonce and nearly two since “Modern Romance” was published. Which begs the question: why are we running a Q and A with the twitter personality about the issue now? The answer is simple: it’s still worth giving credit when credit is due. Below I talked to Blackwell about reflecting on the Beyonce experiment, how she feels about Aziz, and what happens when other people use your content. 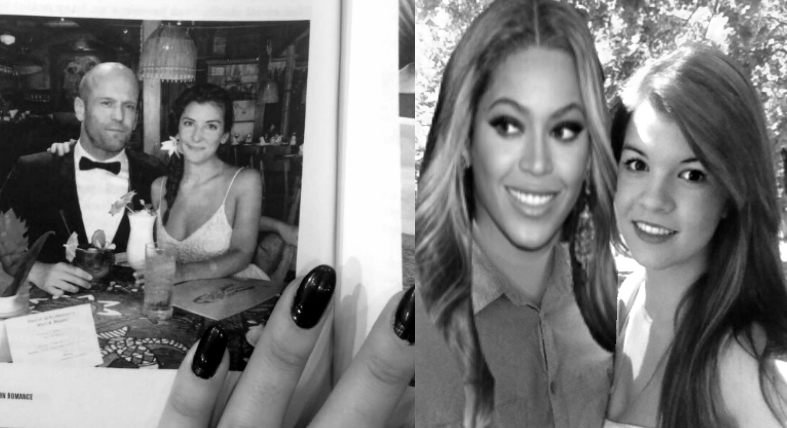 Can you give a brief rundown of the the Beyoncify my Boyfriend project? Why did you do it?

Cassandra Blackwell: I was going through old pictures looking for something to post as a “throwback thursday” and was upset to find most of my photos from the last few years were with my ex. It was a bad breakup and it was hard to look back at our relationship but there were so many memories and photos that I liked of myself that I didn’t want to associate with him – so I covered him with Beyoncé in MS paint and tweeted a photo. The photoshop job was terrible and I think that’s what people responded to the most. I was literally just slapping him with Beyoncé. It blew up on twitter so I did a bunch more and put them on a tumblr and within hours I had like, thousands of people emailing me pictures with their exes asking me to beyoncify them. It was surreal.

It all happened so quickly. The night I made the tumblr I was drinking with my girlfriends and joking about what to say if my ex saw the photos. The next day my face was on CBC news alongside a Queen B of Breakups headline and the cashier at a Forever 21 asked to take a selfie with me. It scared away a few people I had been on recent dates with but the attention was great and I’ve been chasing that high ever since.

That’s wild. How did your ex react?

He hated it, so I did my best to keep it all very light and funny and anonymous. We haven’t spoken since and thanks to the Beyoncé photos I don’t even remember what he looks like. I have literally rewritten the relationship in my head to one I had with Beyoncé and I truly cherish it.

Aziz Ansari talks about your idea in his book Modern Romance and referenced your project during his BookCon Panel. When did you first become aware he had done this?

A few months after his book came out, one of my twitter followers messaged me to tell me about it. I tweeted “a stranger just told me Aziz Ansari talked about me in his book” and some more people sent me links to interviews he’d mentioned my blog in too.

How did it make you feel knowing that he had used that content without asking you?

Every magazine (People, Huffington post, Time, etc) that talked about me or used my photos emailed me first to ask for permission. I was extremely annoyed that Aziz hadn’t. More than anything I was bothered that he was basically like “here’s this cool way a girl revolutionized breakups, and here’s my version of it” followed by pictures of people with like, Jason Statham, which is insulting to both me and Beyoncé. He could have recognized my brilliance without taking my idea for his own.

Have you actually read “Modern Romance”?

I haven’t read it. I saw it at a bookstore after about a month of boiling over in rage about it and flipped through to find the page I was mentioned on and that was it. I still roll my eyes every time I see it in the “humour” section.

You’ve gone viral a handful of times since Beyoncify my Boyfriend. Is it weird that other people make articles out of your pithy social media quips?

I saw a tweet recently that said you should be able to put having your tweets featured in Buzzfeed articles on your resume and I can’t stop thinking about it because it happens all the time. Other people making money off of my content is incredibly weird (Editor’s note: I’ve featured Cassandra in a handful of freelance articles. She’s funny. You should hire her).

Do you feel like females get enough credit for the content they create? Is the vitriol that often goes along with putting your jokes or image out there worth it to you?

The funniest / most well spoken people I follow online are women and they don’t get nearly enough credit for their work. I can’t speak for all of them but any time I have shared sincere writing online it is met with praise from my female followers and messages like “who cares, show us your boobs” from my male followers. Men make it very hard to be a woman on the internet.

To finish off: if Aziz does end up reading this what would you like to say to him?

Make your own damn content, Aziz. Also Master of None season two was very good.

Check out Master Of None Season 2