Vending machines could be the future of retail.

That is, if the concept of one store in Australia catches on.

What it doesn’t have are cashiers, shop assistants and managers. In fact, the owner rarely shows up; he sits back and monitors the store’s CCTV on his cell phone.

That’s because the store – which is open 24 hours a day – relies solely on vending machines.

The store is Australia’s first vending-machine-only shop – and so far, it’s super lucrative. According to The Sydney Morning Herald, each machine turns over $1000 per week. 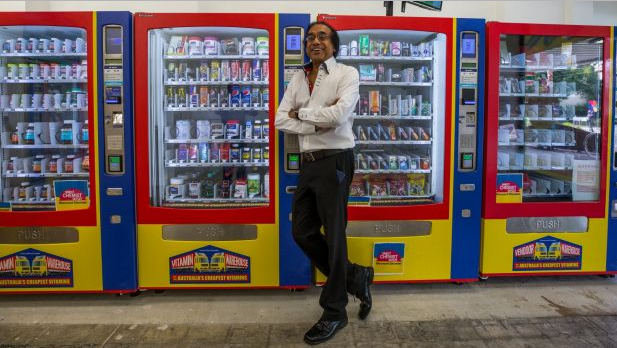 “With a target of 20 machines we are on target to $20,000,”owner Hari Shotham​ told the publication. “Surprisingly, the numbers have been amazing. We haven’t even got a proper sign out.”

While the store is situated in close proximity to other shops offering similar goods, Vitamin Warehouse is able to offer these things at significantly lower prices thanks to the dollars saved on staffing and on theft costs.

“The highest problem in pharmacies is everything has to be under lock and key. Theft is a massive problem. In a vending machine you cannot steal,” says Stotham.

As the store expands its range of offerings, its name will likely change as well.

The plan is to expand rapidly in Australia, with a goal of having 10 more vending-machine-only shops open by the summer. Whether it catches on beyond the borders of “the land down under” remains to be seen.

Anyone looking for a new business venture?