Welcome! You’re here, you’ve arrived, and we’re so pleased to see you. In the words of our Prime Minister, “You are home.” And the sooner you start making yourselves feel at home, the better. So in the interest of settling in, let’s kick things off by answering any questions you might have about our country.

Don’t be shy, fire away!

Will I freeze my ass off?
Yes. Well, no. Technically speaking, you won’t. Temperatures can get well below freezing in the winter, it’s true. But we have great central heating, underground pathways, and many places to pick up a warm winter coat. Plus, we have the full range of seasons, and our summers can get very hot and humid. You’ll just have to be patient…

How many polar bears will I see? One? Six?
More like zero. Polar bears don’t make much of a habit of hanging out in Canadian cities, and while you might see them in Churchill, Manitoba, they are pretty well confined up north to the Arctic. Nor will you, on a regular basis, see a moose or a beaver. What you will likely see daily are racoons… every time you go to take the garbage out.

You may call them ‘Trash Pandas’.

How’s the Canadian dollar looking?
*tugs at collar awkwardly* It’s been better. The truth is, as the price of oil dropped to a six year low, it took the Canadian dollar with it, leaving it at its lowest since 2004. Unfortunately it makes the CAD to USD exchange rate pretty bad right now, at an 11-year low. Sorry about that.

Why are you always saying sorry?
We’re a pretty polite bunch, it has to be said. So if you want to fit in, try using ‘sorry’ where appropriate (and even when it isn’t). It’s a bit of a reflex, but we think it’s reflective of our friendly attitude and nice nature. #sorrynotsorry (but, we are a little sorry). 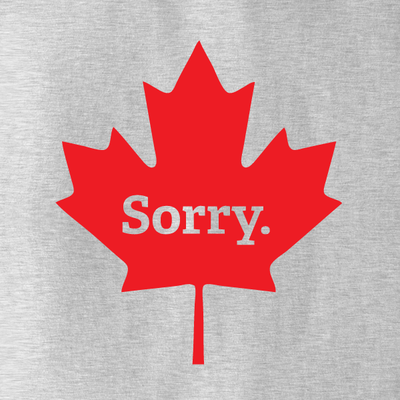 That’s alright. Anyway, speaking of America, I’ve always wanted to go! How easy is it to get there?
Distance-wise, that’ll depend on where you’re based. But it’s a fairly easy passage. It’s known as the world’s longest undefended border, but you still need to be checked if you’re passing through and there will be civilian law enforcement.

Great! Ooh, I’ve got one. Who in the hell is Wayne Gretsky?
Ok, you’re new here so we’re going to let that one go. But for future reference, he is the GREATEST hockey player ever, having played in 20 seasons of the NHL for four different teams. “The Great One” is the leading scorer in NHL history and the only player to total over 200 points in one season. Ok, ok, ‘sorry’! I’m just not that into hockey. What other sports have you got going for you?
It’s true, hockey is the national sport. But we also invented basketball (you’re welcome) and our home team, the Toronto Raptors, made it into the playoffs last season. We’re also pretty mean at curling (look it up). And we’re very big on baseball, so if you haven’t heard of the Blue Jays, now is the time to go type ‘bat flip’ into Google.

Is it true that you don’t lock your doors?
Thanks to Michael Moore’s 2002 documentary, Bowling for Columbine, the world seems to think that we don’t bother to lock our front doors behind us. And while it’s true that Canada is a very safe place, it’s painting with broad brushstrokes to say that none of us use a key. It may be more common in rural areas and some suburbs, but certainly not for the city-dwelling Canadians among us. I’m kind of hungry, what should I eat?
Well, believe it or not, Kraft dinner is our top selling grocery item in Canada. And although it’s often thought of as a very American endeavour, it’s a Canadian product that’s eaten here 55% more than by our Southern neighbours. If that doesn’t float your boat, poutine – fries covered in gravy – is on pretty much every menu in the country.

Help! I don’t speak French. Is that going to be a problem?
Depending on where you live, this could matter a lot or a little. It might be a little challenging in Montreal or Quebec, but you’ll fit in just fine in Toronto if you don’t speak the lingo. Helpfully, virtually all signs in Canada are in French and English.

So, you guys really like to get high, eh?
First, congratulations on your proper use of eh. Second, I’m guessing you’ve heard about the newly elected Liberal Party’s plans to introduce legislation to legalize cannabis as early as 2016. Support for the move is high, with two in three Canadians supporting decriminalization and a reported one million of us smoking the green regularly. Even Justin Trudeau has admitted he’s dabbled.

Ah, Justin Trudeau. He’s a bit of a babe isn’t, he?
Well, I couldn’t possibly say. To each their own, I guess. *blushes*