The key to solving any conflict is to find common ground between opposing sides and then slowly begin to work on tolerating differences from there. In the Middle East, this has been a largely unachievable task, to say the least.

Truces, ceasefires, and peace deals have all been built on shaky foundations, void of unanimous agreement between Israelis and Palestinians.

Hummus, however, is no such shaky foundation. It’s a staple of every person’s diet in the region and holds cultural significance for both sides. Indeed, if there’s one thing everyone in the Middle East can agree on, it’s that hummus is a damn exceptional dish.

And one café in Israel believes the beloved chickpea spread can alleviate tensions where political arrangements have previously failed.

In the wake of recent violence between Israelis and Palestinians, Hummus Bar owner Kobi Tzafrir is offering a 50 per cent discount on hummus to a table where Arabs and Jews sit together.

“If there’s anything that can bring together these peoples, it’s hummus,” Tzafrir told the Times of Israel.

This wouldn’t be the first time, of course…

On a more serious note, the initiative does have some merit. Words, handshakes, and accords between Arabs and Jews have been futile and the fundamental aspects of mutual respect and understanding have been absent in most efforts for a resolution.

“By us we’ve got human beings! And real excellent Arab hummus! And great Jewish falafel! And a free refill for every serving of hummus, whether you’re Arab, Jewish, Christian, Indian, etc.,” reads Tzafrir’s Facebook post. 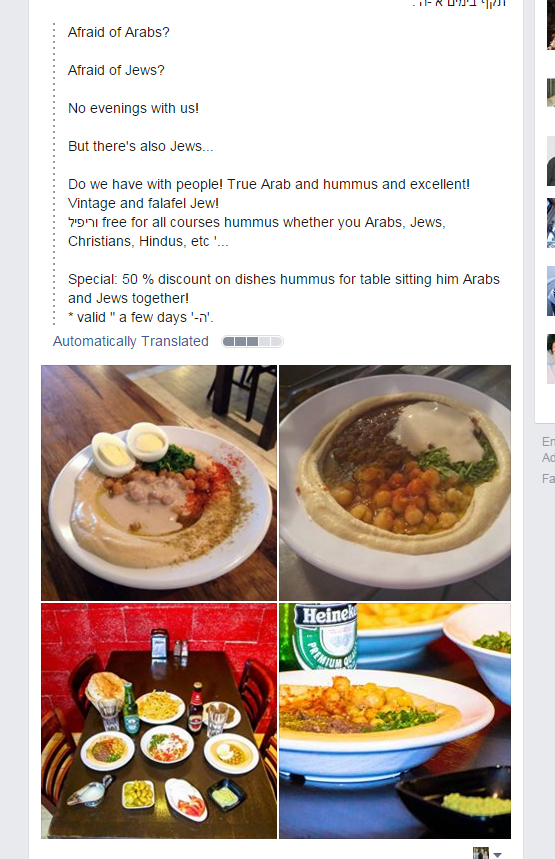 Anthony Bourdain, in a 2013 visit to the region, made a similarly keen observation about the tableside potential to mediate: Is it possible that these people “locked in such an intimate of deadly embrace, might somehow, someday figure out how to live with each other?” he pondered while taking in the culinary delights of both sides.

Given the struggle, sharing a plate of hummus is certainly worth a shot.