Aircraft manufacturer Airbus is back at the drawing board to (re)-redefine the future of airplane seating arrangements.

As you may recall, a few months back they released an anxiety-inducing patent that showed passengers literally stacked on top of one another. It featured a split-level mezzanine with seating down the middle rows that alternates between floor level and an elevated seating level.

And no, it wasn’t exactly met with enthusiasm.

The bench would feature seatbelts that could be configured to fit two “large” adults, three averaged sized adults, or – solving a common logistics problem among young families – two adults with two children in between them. Free of dividers, it could also be helpful for accommodating senior citizens and people with limited mobility. 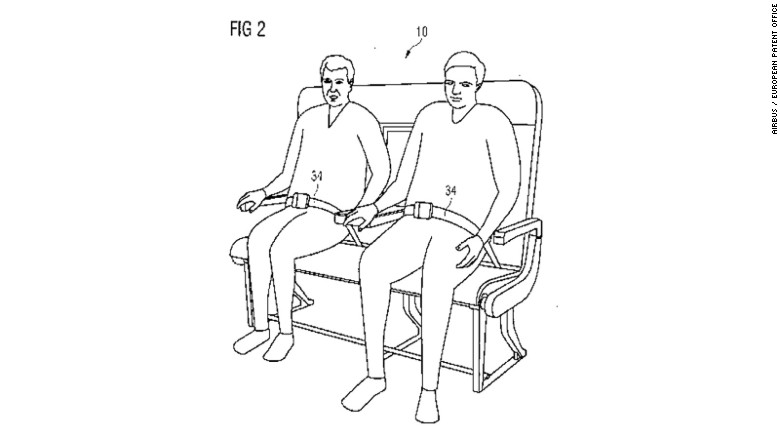 The patent, which was was filed in August and published this month, comes at a time of increased demand for airlines to accommodate people of all shapes and sizes.

Instead of the current system, which distributes costs evenly within a class of seats, the proposed system would allow airlines to index pricing to the amount of space and fuel required to transport a passenger based on the amount of room appointed. Currently, some smaller airlines charge passengers by their weight and others are adding larger seats to accommodate larger people.

The Internet has been quick to comment on the new patent, with many making reference to the somewhat hilariously amateur, basic drawings that accompany it. Just like the so-called “high comfort” promise of October’s patent wasn’t exactly conveyed through the drawings, these recent ones don’t have us too enthused either.

Airbus is known to file patents with high-flying frequency, however, and a patent application doesn’t mean that the company is actually building new seating arrangements.