Remember composing a carefully written message as a kid, folding it up, putting it in a bottle, and sending it out into the ocean (or lake)?

Your imagination would run wild as you dreamed about who would find it and when (even though it usually washed up on the beach at your cottage the next day).

Well, a British scientist will never know what happened to his message in a bottle – and that’s because there’s not a chance he’s still alive.

‘Cause this message is 108 years old.

What is believed to be the oldest message in a bottle ever discovered washed up on a beach in Germany and was scooped up by retired vacationers. The message inside was visible but a larger piece of writing also tucked inside delivered the instructions: “break the bottle.” Inside, they found an undated postcard with no date, but a message that promised a reward of one shilling to anyone who returned it.

Written in English, German, and Dutch, the message asked anyone who discovered the bottle to fill in information on where and how they found it. The return address was the Marine Biological Association in Plymouth.

So the finders did just that, sending the postcard to Plymouth in an envelope to avoid it getting damaged in the mail.

As it turns out, the bottle was one of 1,020 released into the North Sea between 1904 and 1906 by George Parker Bidder, a former president of the association. The bottles were released to examine deep-sea currents and were designed to float just above the seabed so they would be carried by the currents deep below the surface. 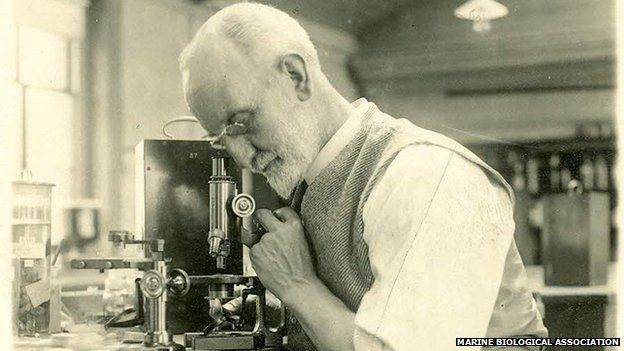 The experiment was conducted to investigate deep-sea currents and the behavior of fish. Many of the bottles were found in a relatively short period of time by fishermen via deep-sea nets, while others washed up on shore. Some were never recovered.

With the ones that were retrieved, Bidder proved for the first time that the deep sea current flowed from east to west in the North Sea. He also discovered that plaice (groups of flat fish) generally swim against the deep current.

The association still does similar research today – but with the aid of electronic tags.

Though they’re still waiting on confirmation from the Guinness Book of Records, it’s believed that the postcard may be the oldest message in a bottle ever found.

Even if it’s not, one thing’s for sure; that bottle has been on one hell of a journey.