Five days a week you wake up before the sun shows face, deal with a 45 minute commute, and participate in the establishment that society deems “honest work.”

Nothing wrong with that, fellow proletariat.

Meanwhile, some kid (fine, he’s an adult) in Texas is making 10k a month by scribbling words on potatoes with a marker and sending them in the mail – something only the intricacies of social media can explain; the kind of shit responsible for a guy raising $55,000 to make a potato salad. (btw: food trend alert!)

Twenty-four-year-old app developing entrepreneur Alex Craig founded Potato Parcel over dinner with his girlfriend, an idea she called the stupidest she’d ever heard at the time. His service allows people to purchase a potato for $8-10, add a custom message, and send it anonymously anywhere in the United States or U.K. 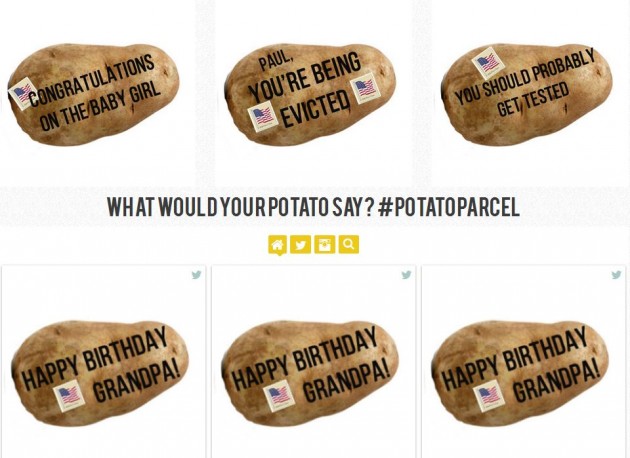 Craig says he received 2,000 potato orders on just the second day of being live, a pace his, um, ‘company’ has maintained since. He’s even picked up a bit of wisdom along the way: “I would say the two things that hold everyone back in life is fear and doubt,” he said.

“The fear of failure and the fear of wasting your time, and the doubt that you can actually achieve something big on a huge scale.”

And that’s the story of how, in 2015, potatoes became the world’s most lucrative crop for the first time since the Middle Ages in Ireland. Or at least since McDonald’s was popular.