When the very pregnant Olivia Wilde was in town for the Toronto International Film Festival (TIFF), she looked like she was ready to pop at any second.

Naturally, the gorgeous star was offered prime, comfortable real estate on the couch at Soho House at a Grey Goose cast party and her fiancé Jason Sudeikis treated her with extra care, as did the staff.

But, as it turns out, being both famous and pregnant doesn’t get you a seat on the subway.

Wilde took to Twitter this week to slam subway riders in NYC for not offering up their seat.

“NBD, able-bodied [subway] riders who won’t give your seat to a GIANT preggo. I’ll just stand riiiiight next to your head and pray I go into labor,” Olivia tweeted. 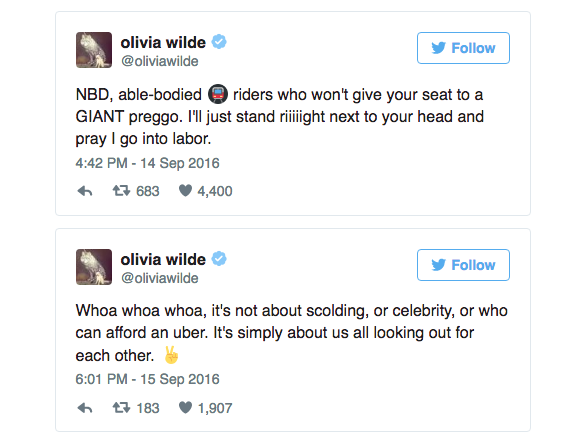 It didn’t take long for women to weigh in with their own subway seat-shafting experiences.

Not everyone was as supportive, however, but Wilde put one user in their place in the best way ever.

When a Twitter user shared: ‘1. I didn’t tell u to get pregnant 2. Get an Uber (you can afford it) 3. I paid the same amt as you for the subway ride.’

The next day she addressed some heat she received for her tweet and said, “Whoa whoa whoa, it’s not about scolding, or celebrity, or who can afford an uber. It’s simply about us all looking out for each other.” 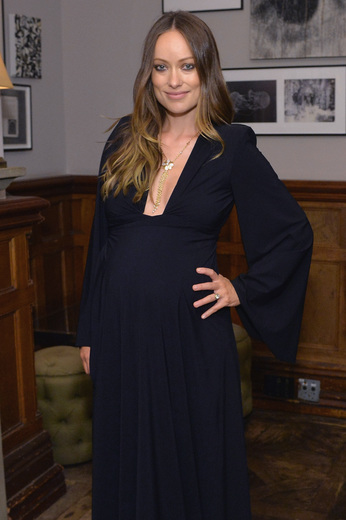 The good news is, that at least the incident didn’t happen to Wilde on the TTC during her time here.

But, such ignorance happens everywhere – and not just to pregnant women either.

I have both seen it happen in person on the TTC (one of the rare and inevitably maddening times that I ride the thing) to elderly people and those with physical disabilities. Back in June, Toronto young professional Brooke Robinson, who lives with MS and walks with a cane told me that it happens all the time.

I get it – having a seat is one of the few very limited luxuries of riding the Rocket. But I’m pretty sure nobody would want to see a loved one struggle through a bumpy subway ride.

Also, word of advice: if you’re going to act like an asshole on public transit in 2016, you could very well end up shamed on social media and faced with a trial by a ruthless social media jury (so not worth the few subway stops spent seated).