Everyone has had dreams of taking flight via a ton of helium balloons.

Well, yesterday, a fellow Canadian did just that.

Daniel Boria decided to take advantage of the crowds at the Calgary Stampede and to draw some major attention to himself. So, he found a lawn chair, attached 110 balloons to it, grabbed a parachute, and took flight.

The plan was to parachute off the lawn chair and land into the Calgary Stampede, but he missed his landing and ended up in a field. He was, however, in the air for long enough for people below to notice and begin to snap away at the sight of the movie Up seemingly coming to life. 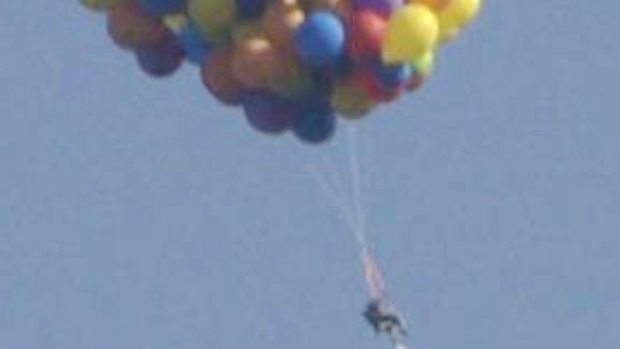 The police weren’t too amused, however, and arrested Boria this morning. The Calgary-native faces a single charge of mischief causing danger to life.

Apparently, he pulled the stunt to raise attention for his cleaning product business.

As for the abandoned lawn chair with the brightly-coloured balloons, it could still be ‘Up’ in the air…