The turn of a New Year is an excellent opportunity to knock back some bubbly, clean up the shrapnel heap that is your closet(s), and make out with 14 people in two minutes without getting one of “those” reputations.

It’s also a great chance to leverage a fresh calendar as a springboard for healthy commitment and personal improvement. We like to bundle that kind of stuff into things called “resolutions.” So while we’re bundling things up, it’s worth recognizing the resolutions you should all consider making together – as a couple.

Here are nine New Year’s resolutions to make with your boo to get next year started on the right foot. These aren’t necessarily problems that need fixing; they’re just good goals to help prevent things from breaking…

1. Show More Interest in Each Other’s Interests
Psychologists conducted an extensive study years ago that led them to discover the number one trait that predicted relationship outcomes. In short, it was the partners’ “Turn-Toward” rates (as opposed to showing indifference or worse) when invited by their significant other to participate in something they deemed relevant or exciting.

Without digging too deep, there’s a simple lesson to extract from this: you don’t have to like everything your partner likes, or do everything they do – but when they show you that they want you to participate, you should. Often. Be it a conversation about submarines or an entire weekend of interpretive dance, do your best to be your partner’s partner even in things that aren’t entirely your jam.

2. Never Be Mean
There is never an excuse to be anything but careful and respectful with your words and your sentiments. Go ahead and be tired, be cranky, be challenging, and be intelligently skeptical. But never be an asshole; no condescension, no dismissiveness, no insults. Save the emotional abuse for people you’re supposed to hate, like arrogant bartenders and parking cops. Even when you’re “fighting,” focus on solving a problem, not crushing a culprit. Always remain conscious of this. If there isn’t a mean bone in your body, that’s great – keep it that way.

3. Really Listen to Each Other’s Advice
After being with someone for a while, it is not uncommon to start naturally experiencing “The Mom Effect”; you hear them talk and give you “advice” so many bloody times that every once in a while, you just kind of, you know, ignore them. Well, don’t do that; they’re not your mother. Hopefully, they don’t look like your mother either.

They’re (supposed to be) your straight-up equal, they (are supposed to) have your best interests in mind and realistically, they know you better than you think. You don’t have to always ask them for their advice, but doing it a bit more often, and actually taking that advice to heart, is usually a good idea.

4. Have More Morning Sex
Potheads were onto something with the whole “Wake ‘n Bake” thing – at a philosophical level at least. Morning sex is a therapeutic, awakening exercise (pun totally intended) on a number of important levels. Work can be stressful and sleep is important, but it’s just as important to prioritize the fun, intimate stuff – especially when it represents the opening scene of your inevitably long and exhausting days, many of which are spent apart. If you’re worried about having your coffee – don’t worry, this is just as effective. It even kind of rhymes with “Starbucks”…

5. Just Have More Sex in General
Mornings are great, but realistically, it’s all good. If you already have “a lot” of sex, wonderful. High five. Now go have more.

6. Don’t Forget the Compliments
I’m not suggesting you say anything you don’t truly mean. If complimentary thoughts don’t pop into your head when you’re around your partner, you’re on the market for “revelations” not “resolutions”. What I’m saying is, don’t be shy about expressing your admiration. If they inspire you with their intellect, tell them. If you love the way they are with your friends, tell them. If they look sexy, tell them. If they have a great ass, tell them, and tell them often as you smack the thing like they just hit a triple in the World Series. Not everyone is fuelled by praise, but as time passes, it’s always nice to know that your finest qualities are still getting noticed by the people about whom you care.

7. Don’t Forget Your Single Friends
They’re not dead, they’re just single. And not every event has to be done in even numbers (what’s wrong with a 7th wheel?). Carving out time for your single friends ensures that you not only maintain important friendships, but that you also maintain some healthy connection to the other more-than-half-of-the-world that doesn’t have on the boo-blinders.

8. Get Each Other More Thoughtful Gifts Outside of “Occasions”
Birthdays, Valentine’s Days, and holidays are great reminders that you’re supposed to do nice stuff for your partner when you’re in a relationship. So is every day you’re lucky enough to be in that relationship. Show up with stuff out of the blue. It could be as small as their favourite candy or as big as their favourite car; reminding someone that you love making them happy is rarely a bad habit. Especially on Mondays.

9. Be More Grateful
If you are lucky enough to not only be Canadian, employed, and healthy, but also to have someone who regularly supports you, listens to you, accompanies you, cares for you, and even lets you look at their junk, you are literally one of the luckiest people in the world. Regularly exercise gratitude – internally and externally – for that reality and for the person whom, by choice, is key to the preservation of that reality. If you can keep this resolution, the rest, I assure you, will come much easier than all that mumbo jumbo about going to the gym. 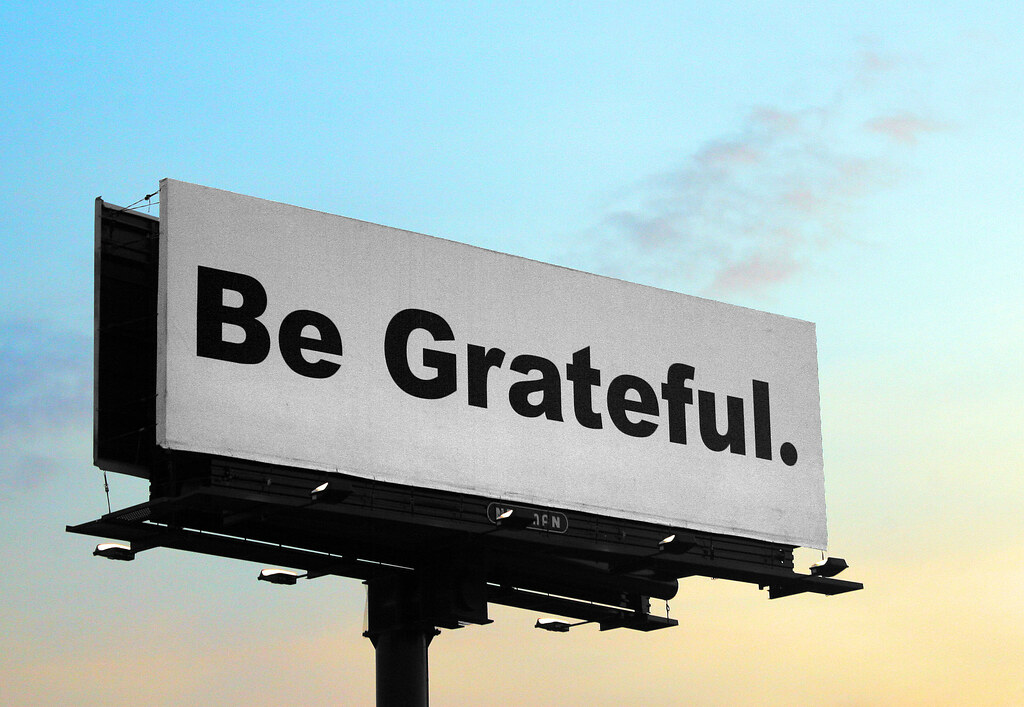