While many find spring/summer an appropriate time to get figure-fit, fall/winter is just as reasonable a time to get friend-fit.

In other words, trim the fat; shed the bulk; drop the dead weight; clean house and get rid of the clutter.

But not in an arrogant way – in a “concerned for your own health and emotional well-being” way.

Just like great friends can bring comfort, confidence, charisma and inspiration into your life, toxic friends can easily, and often inconspicuously, deprive you of those very same rewards. While friend-code requires a degree of dedication to the relationship, and signs of true psychological distress should first be addressed in a supportive way, there’s only so much cost you should incur from a crummy personality for the sake of nostalgia.

If you think about a “friend” and at least a few of the following statements ring true, it might be best to give them the “it’s not me, it’s you” routine…

They’re More Critical Than They Are Supportive
Your friends don’t need to be full-blown cheerleaders – everyone needs an honest pal with a vocal sense of reality – but they sure as hell should encourage your positive aspirations and celebrate your success. Consistent signs of envy, resentment or cynicism will crater moments meant for climax and foster a consistent stream of tension and discouragement. That is literally the opposite of what friends are for. They Ride a One-Way Favour-Train
Following from the first item, people constantly looking and hoping to get hook-ups but never taking the time or thought to dish them out are a breed of selfish we can all do without. Opportunism without natural, asynchronous consideration is not called “friendship” – it’s called “networking.”

They Don’t Care for the Details
You know the drill: they ask “how’s work?”, “what’s new?”, “how’s the love life?” and then the second you get into any significant detail, long-term implications or philosophical thought, you watch their attention drift like everyone’s favourite plastic bag in American Beauty. No further inquiry, no thoughtful response; just head-nodding and eye-shifting. If the specifics of your life and thoughts leave them that flat and impatient, it was probably never meant to be.

You Really Only See Them When There’s Alcohol/Drugs Involved
These are what many call “Party Friends.” And they have their place in an active social life. But as we get older, wiser, and our hangovers feel more like shellshock, it’s not a bad idea to reign in the friends who primarily value the sober version of our company, and slack out the ones who don’t. You’re Never Entirely Sure If They’re Going to Follow Through
Last-minute plan cancellations, dismissed commitments, ambiguous excuses and unpredictable scheduling… ain’t nobody got time for that. Plus, you’ll get plenty of that behaviour when you’re eventually responsible for an infant. 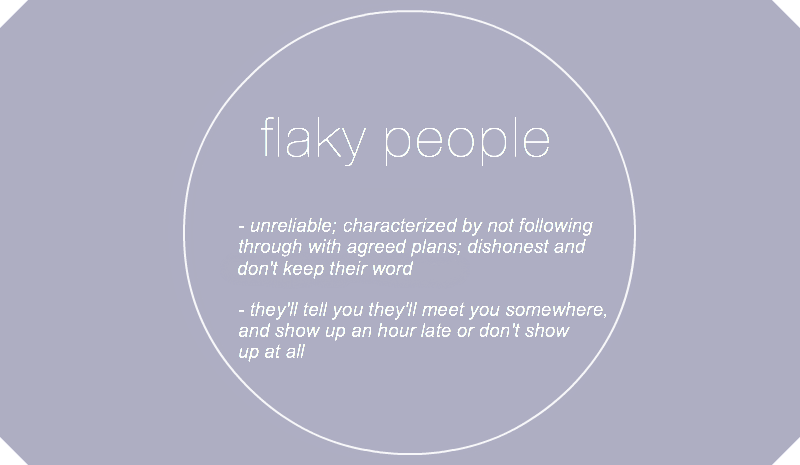 80% of the Time They Talk, They Bitch
It’s perfectly acceptable to play the odd sounding board, but when your job becomes mostly about absorbing their negative, unnecessarily complex woes, you need to re-evaluate the balance and purpose of your relationship. Having a friend is about support, but it’s also about humour, amusement and the stimulating exchange of energy and ideas. You might think you like playing therapist, but it’s probably taking a bigger toll than you’ve reckoned. 50% of the Time They Bitch, They Bitch About Their Other Friends
This is just bad news all around. If they habitually complain about their friends, they’re either attracted to conflict, terminally pessimistic, or something equally unflattering in between. It also means there’s a good chance they yap behind your back too. Often, that can mean…

They Lie and Hide Things on a Regular Basis
Deal. Breaker. At some point or another, on a rare occasion, a friend is going to have to make some gray-zone calls and get a friend’s back. Sometimes that means covering a few tracks or exercising the 5th. But if there is a pattern of misdirection, deceit and denial, and you are consistently being roped into it as either victim or accomplice, get out fast. It’s only a matter of time before you get pinned for something you didn’t do and you couldn’t control. If they’re a proper friend, they will trust you with the truth and they’ll rarely, if ever, ask you to distort it. Or they’ll openly and politely keep you out of it entirely. Regardless of why they behave this way, this is one kind of “friend” we should all aspire to avoid.