It’s no secret we think Toronto is the greatest city in the world, but damn, can it be expensive.

There’s no reason to worry, though, because there are plenty of things to do during the summer that cost nothing more than showing up and having a great time. We’ve rounded up the best free concerts, art exhibits, and food fests to keep both you and your wallet happy.

Disc Golf
When: All summer
Round up your friends and challenge them to a game of disc golf at one of the city’s free disc golf courses. It’s a great way to enjoy the sunshine and test your skills. You can find disc golf at Centennial Park, E.T. Seton Park and on Toronto Island.

Lunchtime Live!
When: Currently — October 30th
Add some culture to your work day and enjoy some free music on your lunch break. Massey Hall presents Lunchtime Live!, a series of midday concerts featuring musicians from around the world at Toronto’s Yonge and Dundas Square.

Front Street Foods
When: June 13th — August 5th
Make your way to Adelaide Place to enjoy food and entertainment in a relaxed atmosphere. The food market showcases some of the city’s best chefs, restaurants, bakers, food entrepreneurs, and artisanal food makers. Admission is free, so both you and your wallet will leave happy.

Live On The Patio
When: June 17th — September 20th
The patio at Roy Thompson Hall will be transformed into an outdoor oasis to celebrate summer with live music, food from Barque, and plenty of beverages. Roy Thompson Hall will be teaming up with members from the music community – Ashkenaz, East Coast Music Week, Batuki Music Society, Lula Music and Arts Centre and more – to bring together some of the best music in the city.

Yorkville Exotic Car Show
When: June 19th
Bring your dad to Yorkville to walk the red carpet on Bloor Street between Avenue Road and Bay Street to get up close with some of the best automotive design from around the world. There will be over 100 classic and exotic cars, including Porsche, Aston Martin, Ferrari and more.

Free Flicks at Harbour Front
When: June 22 — August 31
Every Wednesday evening in the summer, the Harbourfront Centre will present a series of outdoor films with Free Flicks. This year’s lineup includes Mean Girls, Chef, and Sense and Sensibility. Films start after sundown, usually between 8:30 p.m. and 9 p.m.

You Can Show With Us
When: July 1st
Head to Toronto’s OCAD for an open, non-curated evening filled with digital artwork and digital media projects. Share your own work or view the work of other local artists as they celebrate diverse gender orientations, identities and expressions. Presentation slots are assigned on a first come, first serve basis and sign up is at 6 p.m., show at 8 p.m.

Indie Fridays
When: June 24th — September 20th
Every Friday afternoon, you can catch some of Canada’s best indie musicians as they perform in the heart of downtown Toronto at Yonge and Dundas Square for Indie Fridays. Toronto Pride Parade
When: July 3rd
Head to Church and Bloor and celebrate the 35th annual Toronto Pride Parade. Prime Minister Justin Trudeau will march in the parade for the first time in Canadian history, which will be lead by The Prancing Elites, Black Lives Matter, and trans superstar athlete Aydian Dowling.

Redpath Waterfront Festival
When: July 1st — 3rd
If you’re looking to spend your weekend surrounded by great food, live music, and incredible waterfront views, you’re definitely in luck. Toronto’s Redpath Waterfront Festival promises all of that and much more. Rally up your crew to celebrate the Canada Day and the long weekend along the water and check out the waterfront artisan market, snap some pics of the two Royal Canadian Navy defence ships that will be docked, catch some live music, and try your hand at the Navy-themed obstacle course.

Toronto Outdoor Art Exhibit
When: July 8th — 10th
Nathan Phillips Square will be home to Canada’s largest and longest-running outdoor contemporary art fair this summer. Here you can admire the work of 350-plus artists, many of whom will be on hand to discuss their creations with attendees.

Taste of the Danforth
When: August 7th – 9th
Get to the Taste of the Danforth and celebrate the fun flavours of Greece and summer in the city. Every year the city of Toronto flocks to Greektown for a weekend filled with free food, music, and fun attractions.

Sail-In Cinema
When: August 18th — 20th
Sugar Beach will transform into a large outdoor theatre where boaters will be able to dock along a floating barge to catch an evening flick on a huge inflatable screen. This summer’s screening theme will be “Books to Big Screen” and will feature three films derived from iconic books. The final line-up of films will be selected through a public vote being launched mid-June. 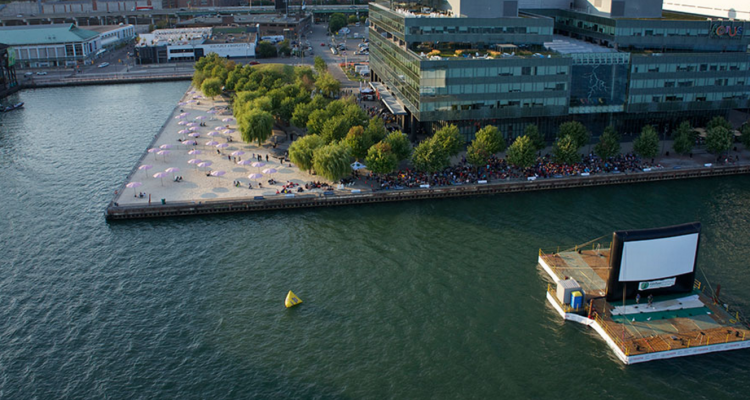