Ronda Rousey was already one of the world’s most dominant athletes before Saturday’s astronomically hyped fight against trash-talking Brazilian Bethe Correia.

So when she stepped into the ring and pulled off a knockout victory in just 34 seconds, her star reached global icon status.

But on top of showcasing her incredible prowess as a fighter, it was also the first time many casual and non-fans of UFC got a chance to dive into the character of one of today’s most intriguing female figures. We were captivated by her measured confidence, outlook on life, and willingness to use her influence to empower others.

From issues surrounding body image to self-improvement and chasing dreams, here are 12 quotes that prove Ronda Rousey is just as badass outside the ring as she is in fight mode….

1. People like to say that my body looks masculine. I’m like, listen, just because my body was developed for a purpose other than f*cking millionaires doesn’t mean it’s masculine. I think it’s femininely bad-ass as f*ck because there isn’t a single muscle in body that isn’t used for a purpose; I’m not a do-nothing bitch.

2. Some people like to call me cocky or arrogant, but I just think, “How dare you assume I should think less of myself? The problem isn’t me thinking I can achieve any goal I set for myself, the problem is you projecting your own self doubt onto me.

3. I have so much passion, it’s hard to hold it all in. That passion escapes as tears from my eyes, sweat from my pores, blood from my veins.

4. People say to me all the time, “You have no fear.” I tell them, “No, that’s not true. I’m scared all the time. You have to have fear in order to have courage. I’m a courageous person because I’m a scared person.

5. When I was in school, martial arts made you a dork, and I became self-conscious that I was too masculine. I was a 16-year-old girl with ringworm and cauliflower ears. People made fun of my arms and called me “Miss Man.” It wasn’t until I got older that I realized: These people are idiots. I’m fabulous.

6. If you can’t dream big, ridiculous dreams, what’s the point in dreaming at all?

7. Life is a fight from the minute you take your first breath to the moment you exhale your last.

8. Look at my face. Does it look like I can take a good hit? 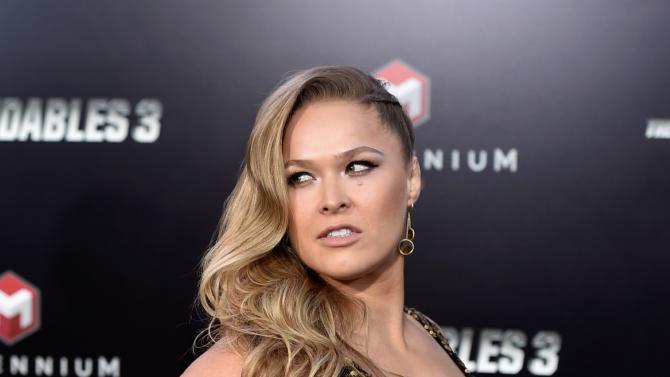 9. I either get men coming up to me like, “Oh, my God, baby, I love you!” or else they’re too shy to approach me. Can I get just a little in between?

10. My first injury ever was a broken toe, and my mother made me run laps around the mat for the rest of the night. She said she wanted me to know that even if I was hurt, I was still fine.

11. This past Halloween girls across the country dressed up as Ronda Rousey. That’s because she’s an amazing, beautiful, and powerful woman.

12. I love Canadians. They are the coolest, nicest, most patriotic people, and they will support their countrymen no matter what, and I think that’s commendable.

Yup, that last one’s the winner.